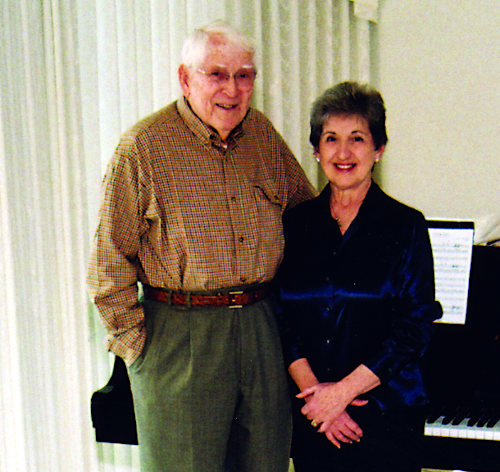 A charitable gift annuity is a simple contract between a donor and Thomas Aquinas College. In exchange for an irrevocable gift of cash, securities, or other assets, the College agrees to pay one or two annuitants designated by the donor a fixed sum each year for life. The sum paid is a percentage of the donated funds based on the age of the annuitant(s). The donation entitles the donor to an income tax, gift tax, and/or estate tax charitable deduction.

In 2002, both Hugh Moore and Tresa Buydos lost their spouses after many years of marriage. God, however, did not have single lives in mind for them. They met after Mass one Sunday at St. Edward’s Church in Dana Point, Calif., where Tresa is a member of the choir. On that day, however, the choir wasn’t assembled; instead, Hugh marveled at the woman next to him in the pew who “sang like a thrush.” He complimented Tresa on her voice and then discovered that he used to play cards with her deceased husband during their days together as Knights of Columbus. After a whirlwind courtship, Hugh and Tresa married on July 15, 2003.

Hugh’s background in business and finance is extensive. Following his graduation from the University of California at Los Angeles in 1948, he entered the retail auto business as a part owner of the Pontiac agency in Montrose, California. Six years later, he sold his partnership and entered the real estate field. But he returned to auto retailing in Southern California when, in 1970, he became a partner at Buckingham Cadillac in Inglewood. His interest in people — and his people skills — then led him to Orange County and into yet another career, this one in insurance for schools and non-profit organizations.

Mr. Moore learned about Thomas Aquinas College in the mid-1970s through the father of several graduates of the College, the late Bill Ivers. Mr. Moore and Mr. Ivers were fellow parishioners at St. Bede’s Church in La Canada, Calif., and Mr. Moore is godfather to Mr. Ivers’ daughter, Lorraine (’81). Mr. Moore explains that, through his connection with the Ivers family, he has followed the progress and development of the College with interest. He has also contributed generously to its annual fund.

Over the years, Mr. Moore has become aware of how great a need there is for genuine Catholic education at the college level and says, “I am convinced that Thomas Aquinas College provides exactly what is needed. An education using the great books in a Catholic framework helps set young people on the right path for the rest of their lives. Thomas Aquinas College students are evidently bright and motivated, and they get a superior education.”

What led the Moores to make a charitable gift annuity donation to Thomas Aquinas College? Mr. Moore explains that, “From everything we know about it, the College is 110 percent Catholic. We’re firm believers in orthodox Catholic education, and this is our primary reason for supporting Thomas Aquinas College. The type of people associated with the College — the students, the faculty, the members of the Board of Governors — are most impressive.”

So, when the College’s Gift Annuity Program was yet in the preparatory phase, Mr. Moore requested information about making a charitable gift annuity donation to the College. His research at that time led him to conclude that, “The annuity payments offered by the College are good compared to those we had investigated through other charitable institutions to which we have been committed. My financial advisors agreed that the College’s audited financial statements are solid, and its endowment investment strategies are prudent and successful. We were therefore confident in the College’s annuity program. And, since the mission of Thomas Aquinas College is so important to Tresa and me, we decided this is where we should make our donation. Being the first donors to the annuity program was an unexpected bonus.”

Learn More About the St. Thérèse of Lisieux Legacy Society!