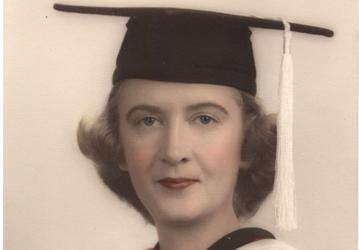 There are many ways in which Dr. Ruth Hoffman, a member of the Thomas Aquinas College St. Thérèse of Lisieux Legacy Society, will be remembered: Some will recall the scholar, the committed sociologist who bristled at the politicization of her discipline. Others will think of the talented woodcrafter and baker, or the prudent investor who purchased and maintained several rental homes in the San Fernando Valley. Still others will cherish memories of the avid globetrotter and reader who always owned a pair of housecats — and never accepted phone calls during University of Nebraska football games. All, however, will remember Ruth as a devoted friend.

“Nobody could take her place as a friend and companion because it would be impossible to recreate that combination of intellect and wit, dedication and caring, high standards and high performance,” says Dr. James Delahanty, her best friend and former colleague from Mount St. Mary’s College in Los Angeles, where Dr. Hoffman taught for 25 years. “Friendship was primary in her life,” adds Jane Delahanty, Dr. Delahanty’s wife. 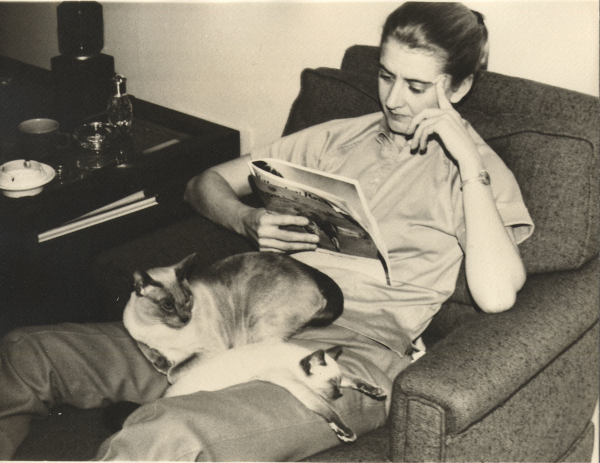 The daughter of Fern and John Hoffman, Ruth acquired her passion for learning (and Nebraska football) at a young age from her beloved “Auntie Pekar,” a onetime tutor for the Cornhusker players. Ruth would herself go on to attend the University of Nebraska, earning two bachelor’s degrees, a master’s, and a doctorate in sociology. She then taught briefly at Duke University before joining the Mount St. Mary’s faculty in 1964. Raised a Protestant, Dr. Hoffman entered the Catholic Church in 1992 and around that time first learned about Thomas Aquinas College. “She liked the classical approach and the great books curriculum, and she liked that the College was not playing games with the Catholic direction of the school,” Mrs. Delahanty observes. “That combination of faith, her belief in how academics should be conducted, and her sense of what mattered most in life led her to Thomas Aquinas.”

That same year Dr. Hoffman sold her rental properties and moved into a stunning home in Santa Barbara with panoramic views of the Channel Islands. There she lived with Dr. Jeanne Trabold, a retired art historian from California State University, Northridge, who was so much like a part of the family that she and Dr. Hoffman called each other cousins. Until injuring her neck in 2005, Dr. Hoffman spent her retirement traveling, filling up her home with hand-crafted woodworks, and delighting in the company of her many friends.

One of those friends was Tom Susanka, the College’s emeritus director of gift planning. “I always enjoyed my visits with Ruth up in Santa Barbara,” Mr. Susanka says. “We talked about books; we talked about the College and her experience as a teacher. We would also have conversations about the Faith, about which she maintained a lively sense of wonder.”

In her last few years those visits became more difficult for Dr. Hoffman. Multiple neck and back surgeries were debilitating and, for the last two years of her life, she was bedridden. Nonetheless, she remained “vibrant and energetic,” says Mrs. Delahanty. “You could still see her sparkle.” Notes Mr. Susanka, “She never gave up the intellectual life. Even when she died, she was surrounded by a welter of books and magazines.”

The only child of deceased parents and never married, Dr. Hoffman leaves no survivors. She does, however, leave a powerful legacy through the students she enlightened and, even more significantly, through the friends whose lives she touched. She also has established quite a legacy at Thomas Aquinas College, to which she willed a generous portion of her estate, the product of decades of diligent saving and sound investment.

“It is fitting that someone who so loved books and learning, who held the Faith and education in such high regard, would give the fruits of her life’s work to the students of this college,” reflects Mr. Susanka. “We are honored to count ourselves among Ruth’s friends. Her friendship with the College and her influence on it will long be cherished.”

Learn More About the St. Thérèse of Lisieux Legacy Society!