Walter J. Conn served on the Thomas Aquinas College Board of Governors from 2013 until his death one year later, on September 18, 2014, continuing a longstanding friendship between the College and the Conn Family. That relationship began in 1992, when one of Mr. Conn’s brothers, Rev. Thomas Conn, S.J., came to the College as a chaplain, a position in which he faithfully served until his own death, from cancer, in 1997. During that time Fr. Conn was an enthusiastic evangelist for Thomas Aquinas College, introducing it to all those he loved, including his brother James, who has been a member of the Board of Governors since 1995, and Walter, who served on the board until his death on September 18, 2014.

“I got to know the College because Tom was so pleased about it,” recalled Mr. Conn. “He liked that it was so strongly Catholic, and that it taught people about life rather than about business or something else so narrowly focused. He was very impressed with that, and he felt the College taught the Faith even better than some of the seminaries.” Inspired by his brother’s endorsement, Mr. Conn became a benefactor of the College in 1993. “Thomas Aquinas is doing a great deal of good for its students,” he said. “It helps young people understand what is important in life and how to become better people through God’s teachings.”

The son of Irish immigrants, Mr. Conn grew up in South Pasadena, Calif. He attended the University of Santa Clara through the Reserve Officers Training Corps program, and upon graduating, entered the U.S. Army, where he served as a missile officer, first in San Francisco and then in Germany.

In 1963, having attained the rank of captain, Mr. Conn received an honorable discharge from the Army and decided to pursue a career in real estate. He took a job with Charles Dunn Co. in Los Angeles and established what became one of the largest regional property-management companies in Southern California. In 1995 he purchased the other divisions of Charles Dunn Co. and became its chairman.

In addition to his work for Thomas Aquinas College, Mr. Conn served on the board of the International Theological Institute and was a trustee emeritus of Gonzaga University. He also sat on the boards of the Los Angeles Opera, the California Hospital Medical Center Foundation, the Society Devoted to the Sacred Heart, and various other organizations. He is survived by his wife, Donna, and their three adult children.

“Walter was a valued member of our Board of Governors and a great supporter of Thomas Aquinas College,” says Thomas Aquinas College President Michael F. McLean. “We pray for his eternal rest and also for the consolation of Donna; their children; his brother, Jim; and the entire Conn family.” 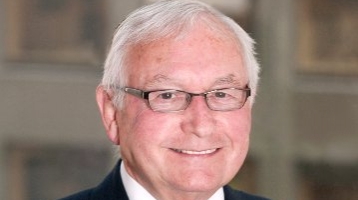