Reprinted with permission from Cool Colleges: For the Hyper-Intelligent, Self-Directed, Late Blooming, and Just Plain Different. © 2007 by Donald Asher, Ten Speed Press, Berkeley, CA. Available online, or from your bookseller, or by contacting Ten Speed Press at 800-841-2665. 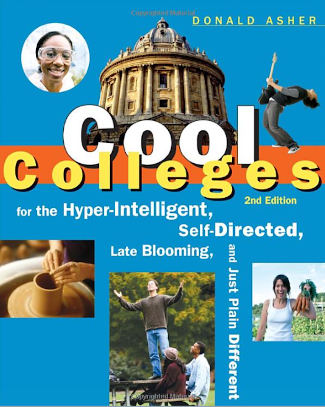 The best college class I ever attended, undergraduate or graduate, was at Thomas Aquinas College, a school affiliated with the Catholic faith and with a rigorous great books curriculum. All the students had read and thought about the assignment, a difficult passage in Philosophy of Religion with which I happened to be familiar. All the students participated equally, the men and the women, and intelligently, which was easy to discern due to the nature of the passage. They backed up their comments with evidence and careful, logical arguments.

They were politely influenced by one another’s thoughts, with the conversation building in a sequence (instead of that compounded non sequitur that happens when students are simply waiting their turn to say what they think). The reading itself was the focus of the class, and any tangents that did come up were gently steered back to the central question by the professor. The professor was a master of the material, and had read the original in Latin, which he occasionally used to discern the most exact meaning of the more esoteric sentences. The students spoke for perhaps 90 percent of the time, the professor only occasionally interjecting guidance. No one knew for sure where the conversation was headed. The hour passed as if it were a moment.

This class had begun with a prayer, for which the professor and all the students but one stood. The one student who did not stand was an atheist, who had chosen this school as an excellent place to get an education, and had said as much to the admission committee, both that he was an atheist and that he thought they offered an outstanding education. They admitted him, he came, and his presence was proof positive that this was an institution of higher learning, a place where critical thinking was the goal, not indoctrination. I shall remember this class, where I was but a guest, for the rest of my life.