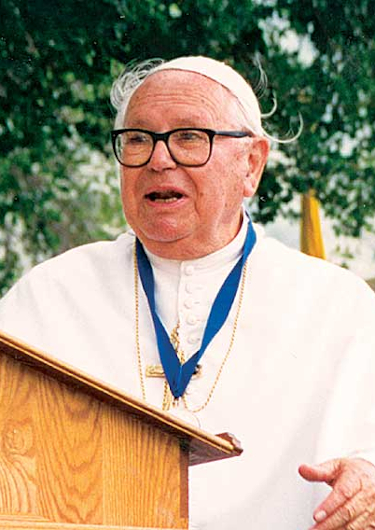 Rev. Ladislas Francis Parker, O. Praem., was offering Mass the day Soviet soldiers shelled the bell tower and stormed his abbey in post-World War II Communist Hungary. Yet the young priest was undaunted, even when one of the Russians pointed a gun at his stomach. Fr. Parker “told me that he simply offered him a drink,” recalls Rev. Sebastian Walshe (‘94). “So the major put down his gun and they went and had some vodka together, after which Abbot Parker rejoined his confreres on the other side of the abbey.”

Such was the equanimity of the young priest who, in 1955, fled Hungary with six of his fellow Norbertines, crossing a river, a minefield, and sundry barbed-wire fences before reaching freedom in Austria. That same serenity would continue to shine throughout his life as he founded a religious community and a high school, endured a lengthy illness, and ultimately died on January 3, 2010, at the age of 94.

“I was always impressed that Fr. Abbot Parker continued to have such a tranquil countenance and great fidelity to common prayer during the recent years, even as his condition deteriorated,” says Rev. Fr. Hildebrand Garceau, O. Praem, a member of the Thomas Aquinas College Class of 1978 and now a Norbertine priest. “In general, it seems that Fr. Abbot cooperated with many graces that produced wonderful fruit for the Church in southern California.”

In 1957, Fr. Parker and his fellow refugee monks from Hungary reunited in Santa Ana, Calif., where they took jobs as teachers at Mater Dei High School. Four years later, they founded a novitiate and junior seminary in the nearby city of Orange, with Fr. Parker serving as its administrator. In 1984, the monastery was elevated to abbey status, and Fr. Parker was named its first abbot, a position he held until the age of 80.

By that time, St. Michael’s Abbey of the Norbertine Fathers had grown to 41 priests and nearly 60 confreres. Today, it boasts 51 priests and 18 seminarians. The community also oversees St. Michael’s Preparatory School, which offers a classical education for boys and is ranked one of the top 50 Catholic high schools in the nation. In recent years, a good number of the school’s graduates have gone on to enroll as freshmen at the College.

“Abbot Parker was always a very faithful friend of Thomas Aquinas College,” says President Michael F. McLean. “In the early days, he traveled extensively with founding president Ronald P. McArthur, helping him to raise funds to establish the College. And in later years, he graciously allowed his priests to serve here as chaplains.” Likewise, a good number of the College’s graduates have gone on to pursue vocations at the abbey.

In 1997, the faculty and Board of Governors of Thomas Aquinas College conferred upon Abbot Parker the College’s highest honor, the Saint Thomas Aquinas Medallion, for serving — in the words of late College president Dr. Thomas E. Dillon — as “a model of priestly and religious life.” Three years later, Abbot Parker officiated at the College’s Baccalaureate Mass in 2000.

In his remarks to the graduates upon receiving the Saint Thomas Aquinas Medallion, Abbot Parker recalled his own college graduation in 1935, regretting that he and his classmates had focused so much on their past accomplishments rather than looking ahead to their future obligations. That failure, he lamented, may have contributed to the tragedies that afflicted Europe in the subsequent decades. He challenged the College’s graduates to make decisions wisely, mindful that the consequences of those actions will shape their earthly and eternal lives. “Respice finem,” Abbot Parker urged. “Look out always for your final destiny.”