The Hon. William A. Wilson, the first U.S. Ambassador to the Holy See in 117 years and an emeritus member of the Thomas Aquinas College Board of Governors, died of cancer on December 5, 2009, at his home in Carmel Valley, Calif.

After earning a degree in mechanical engineering from Stanford University in 1937, Mr. Wilson married Elizabeth “Betty” Johnson in 1938. During World War II, he served as a captain in the Army Ordnance Corps. He worked for his family’s business, Web Wilson Oil Tools, eventually becoming president, until the company’s sale in 1960. From there, he had a successful career as a real estate developer, cattle rancher, and investor.

In the 1960s, the Wilsons struck up an enduring friendship with an actor named Ronald Reagan and his wife, Nancy. Bill became one of Mr. Reagan’s early supporters and advisers, and when the latter became governor of California, he appointed his friend to the state university’s Board of Regents. Upon taking office in 1981, President Reagan then appointed William A. Wilson as his personal envoy to the Holy See — a position that was eventually upgraded to ambassador in 1984 after Congress repealed an 1867 law forbidding the use of federal funds for a diplomatic mission to the Holy See. For five years, Ambassador Wilson represented the United States to the Holy See, dealing with the highest levels of the Church and the American government.

Introduced to the College by member of the Board of Governors Miss Rosemary Donohue, Ambassador Wilson was, he said, “attracted by the curriculum and could see it was educating students while maintaining a religious atmosphere.” He joined the Board in 1988 and chaired its finance committee. In 1998, he escorted then-College President Thomas E. Dillon and his wife, Terri, on a trip to Rome to meet Pope John Paul II, then-Cardinal Joseph Ratzinger, and other Vatican officials.

“Bill Wilson was a very generous, very good friend to Thomas Aquinas College,” said Peter DeLuca,who was serving as the College’s interim president at the time of Ambassador Wilson’s death. “He was always committed to doing whatever he could to advance the College and its mission.”

Mr. DeLuca represented the College at Ambassador Wilson’s funeral Mass, where various family members spoke of his love for the College. “Just days before he died,” said Mr. DeLuca, “Bill received a Thomas Aquinas College Christmas ornament that we had sent him in the mail. Knowing how much he cared for the College, his family chose to include the ornament among the personal items they enclosed in his casket.” Ambassador Wilson has been laid to rest beside Betty, who passed away in 1996. The couple are survived by their 2 daughters, 6 grandchildren, and 11 great-grandchildren. 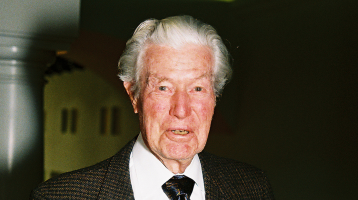