“What could be more inspiring than a man whose whole mission in life was to be a second Christ in the world and bring others to total conversion?” asks Margaret (Steichen ’84) O’Reilly, author of Sinner, Servant, Saint: A Novel Based on the Life of St. Francis of Assisi. “St. Francis was a man so dedicated to that ideal that his every action, every thought, and every eloquent word spoke of it with irresistible authenticity.” 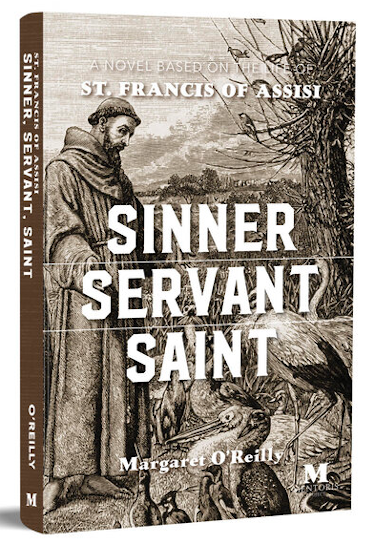 Sinner, Servant, Saint is, like Mrs. O’Reilly’s 2018 book, Humble Servant of Truth: A Novel Based on the Life of Thomas Aquinas, part of the Mentoris Project, founded by Thomas Aquinas College Governor Robert Barbera to publish novels based on the lives of inspiring  Italian and Italian- Americans. “The purpose of Mentoris Books is to introduce readers to men and women of the past who have had a significant influence on the world and who, by their lives, inspire others to greatness,” Mrs. O’Reilly reflects. “The life of St. Francis is instructive to people of every era because of his own moral struggles in his early life and his profound conversion.”

Mrs. O’Reilly’s research for the novel began decades ago when she came across a copy of Felix Timmermans’ 1952 novel, The Perfect Joy of St. Francis.  “I found it extremely moving. I began to wonder how much of the story was true and how much was added for literary effect,” she recalls. “I did some research then and, to my surprise and delight, discovered that the most beautiful elements of the novel were based in truth. When Mentoris Books asked me to write a novel about St. Francis, I knew where to begin. There is a myriad of literature available about St. Francis, but not all of it is accurate. I gathered a bookshelf full of original sources and began to read. It was the most enjoyable kind of homework!”

Through her research, Mrs. O’Reilly discovered a spiritual depth to St. Francis that may surprise readers who know him only as the “animal-peace-and-nature advocate” found in garden statues.  “It was his love of God, his devotion to the Church as the means to salvation, his zeal for souls, and his abhorrence of sin that motivated him,” she explains. “More than anything else, he was driven by a powerful desire to be united to Christ through suffering.”

After graduating from the College in 1984, Mrs. O’Reilly earned catechetical certification from Our Lady of Peace Pontifical Catechetical Institute in Beaverton, Oregon. She went on to teach high school theology and Church history at St. Agnes High School in St. Paul, Minnesota. A homeschooling mother of 12, she has published articles on theological and apologetic topics in various Catholic publications including Homiletic and Pastoral Review and The Catholic Response.

“For this particular writing project, my TAC education was helpful because my familiarity with thinkers of the Middle Ages made research into that era much easier. Further, the imperative to write clearly while a student at TAC, and to avoid making any assertion that I could not competently defend, has been another benefit of that education,” she says. “On another level, my formation at TAC helped me to appreciate what motivated St. Francis, namely his devotion to Christ and the Church. I found that, because of the reverence for truth and wisdom engendered at the College, I was able to get a glimpse into the heart of this incredible saint and be moved to love what he loved.”