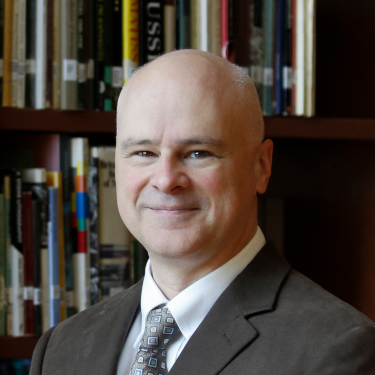 In a newly published book, Dr. Michael Augros (’92), a tutor at Thomas Aquinas College, New England, brings a little-known, yet fundamental work of St. Thomas Aquinas to English readers — for the first time.

St. Thomas’s Exposition on ‘The Divine Names’ is a line-by-line commentary on a treatise which medieval philosophers mistakenly believed to be by the Dionysius mentioned in the New Testament (cf. Acts 17:34), an early pagan convert of St. Paul. The treatise, The Divine Names, addresses how finite intelligences can know and speak about the infinite God — a question that would acquire supreme importance in St. Thomas’s Summa Theologiae.

“There is some need to explain why this work did not sooner undergo complete translation into English,” says Dr. Augros in the volume’s introduction. “Thanks to modern scholarship, the author of The Divine Names was some time ago demoted from Dionysius, disciple of St. Paul, to Pseudo-Dionysius.” But Dr. Augros adds another, perhaps more pervasive reason. “Some notable exceptions aside, many English-speaking Thomistic scholars of the last couple of centuries have focused more on the Aristotelian than the Platonic and Neoplatonic roots of St. Thomas’s thought.” This commentary’s careful engagement with a deeply Neoplatonic text, therefore, limns an underappreciated dimension of the Angelic Doctor’s mind.

Among the most prolific scholars on the College’s faculty, Dr. Augros is no stranger to complex writing projects, but this latest book had a singularly roundabout genesis. It began 17 years ago, in Washington, D.C., where one Christopher Briggs was working in the publishing field — and dipping into Thomistic theology when he could. One day, he made a startling discovery: “Not all of Aquinas’s works had been translated from the old Latin into the new Latin — which is to say, English,” says Mr. Briggs. “I couldn’t believe that!” Among those untranslated works was this commentary on The Divine Names. 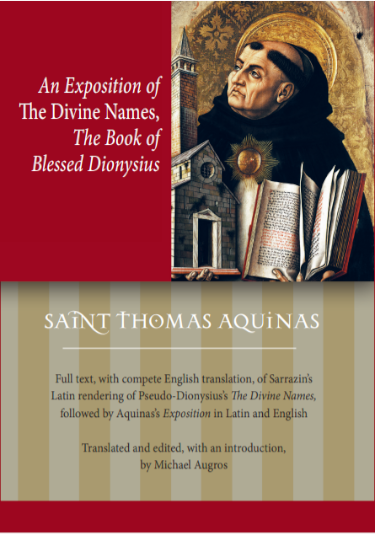 Mr. Briggs brought this troubling discovery to his friend, Dr. Christopher Oleson, then teaching at a Catholic seminary in New York, who shared his dismay at the incomplete translation of St. Thomas’s works. When Mr. Briggs proposed funding a translation project, the ideal translator sprang into Dr. Oleson’s mind: Dr. Augros, who was teaching at the same seminary at the time. “I called up Mike and said, ‘You don’t know me, but Chris Oleson said I should talk to you,’” Mr. Briggs recalls. “I asked him not only to take the commentary out of the Latin into English, but to translate The Divine Names itself.” Perhaps to Mr. Briggs’ surprise, Dr. Augros responded with a simple and enthusiastic, “Great! When do we start?”

Although the initial translation took Dr. Augros a mere eight weeks in 2005, the process of revision — not to mention the sublunar necessities of licensing the text and finding a publisher — was more time-consuming than Mr. Briggs had anticipated. Moreover, life intervened. Dr. Augros and Dr. Oleson relocated to teach at Thomas Aquinas College in 2009 and 2010, respectively, and Mr. Briggs was pressed with other professional and personal commitments. Even so, none gave up the hope of finally delivering Dr. Augros’s masterful translation to the press. At last this year, thanks to the attentive editorial eye of another Thomas Aquinas College tutor, Dr. Sean Cunningham, the volume has finally seen the light of day, published through Thomas More College Press as the first in a series of translations of the medieval scholastic tradition.

The long and difficult road to publication was worth it: Readers are already hailing Dr. Augros’s translation as a milestone in English-speaking Thomistic studies. “The book is a gem: It is expertly translated, helpfully includes the original Latin on facing pages, and features an excellent introduction,” says Dr. David C. Schindler, professor of metaphysics and anthropology at the Pontifical John Paul II Institute in Washington, D.C. “In relation to the ongoing task of a proper interpretation of the thought of Aquinas, it is indispensable. This book deserves to be on the shelf of every serious scholar of the classical Christian tradition, right next to Aquinas’s two Summas.”

Readers can thank Dr. Augros and his editors for this translation of An Exposition of ‘The Divine Names’, which will prove an invaluable treasure to any who pursue truth and wisdom in the spirit of St. Thomas Aquinas.