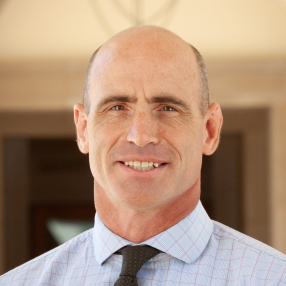 At the age of 34, having already earned a black belt in taekwondo and seeking a new outlet for physical exercise, Chris Oleson decided to take up Brazilian jujitsu. “It’s a form of submission grappling, and it’s the most intelligent martial art I’ve ever encountered,” he says. “There are all sorts of sweeps, counters, and reversals. It’s like living, fast-paced human chess.”

Six years later, he would put that sort of agility to a new use as a tutor at Thomas Aquinas College. Indeed, a lifetime worth of grappling — with challenges both intellectual and spiritual — seem to have prepared him for just this undertaking.

Growing up, Dr. Oleson was “unchurched,” as he puts it, until his senior year in high school when he embraced evangelical Christianity. With his conversion came a newfound love of the intellectual life. “All of a sudden, reality was much more mysterious and interesting than it had been before,” he recalls. Inspired by a history course he had taken in his senior year in high school, he enrolled at the University of California, San Diego, as a classical studies major.

Through his involvement in a campus Christian group, Chris met his soon-to-be bride, Rachel. The couple married shortly after their graduation and moved to New Haven, Conn., where Chris would study for a master of arts in religion at the Yale Divinity School. There, attending an evangelical Episcopalian church, the Olesons came to appreciate sacramentality and liturgy, which — coupled with Chris’ theological studies — helped nudge them toward the Catholic faith.

After Yale, Chris enrolled in The Catholic University of America to earn a doctorate in philosophy. During that time, he began to experience two competing pulls — one toward the Anglican ministry, the other toward the Catholic Church. With Rachel expecting the first of the couple’s seven children, he was determined to resolve this conflict.

“I want our baby to be baptized in the church where I think I should be for life,” he remembers thinking. With class out for the summer, Chris spent the next six weeks “doing nothing but reading encyclicals, conciliar documents, and books by Catholic apologists.” He also discussed the matter at length with elders at his Episcopal parish. Within a few months, drawn by a love for the Eucharist, he and Rachel would come into full communion with the Catholic Church. Once again, his spiritual conversion would have profound intellectual implications.

Upon completing his doctoral studies, Dr. Oleson took a position as an associate professor of philosophy at the North American campus of the Pontifical University Regina Apostolorum, a Catholic seminary in Thornwood, N.Y. On his first day, he met a professor who was an alumnus of Thomas Aquinas College, Dr. Michael Augros (’92). The two quickly became friends and intellectual companions. Through Dr. Augros’ influence, Dr. Oleson says, he began “a years-long pursuit and study of St. Thomas and the objective meaning of things in light of Thomistic philosophy.”

Over the course of their 10 years together in New York, the Oleson and Augros families would form a close bond. So there was much sorrow, especially among all the children, when Dr. Augros left his seminary post in 2009 to become a tutor back at his alma mater. It was likewise with great joy when Dr. Oleson followed Dr. Augros’ lead by joining the Thomas Aquinas College faculty in 2010. Coming to the College, he says, provided him and Rachel with an opportunity to return to Southern California and reconnect with family and old friends, while enabling him to teach in the sort of program for which all his grappling, both intellectual and spiritual, has well suited him.

“Looking back at my whole intellectual trajectory,” he reflects — his early interest in the Western intellectual tradition, which begat a zeal for philosophy, theology, and the Catholic Church, culminating in a discipleship to St. Thomas Aquinas — “I see what a good fit the College is for me.”

Dr. Oleson is happy to trade the lecturing he did at the seminary for the Discussion Method employed in the College’s classrooms. “It is more demanding because when you’re giving a lecture, you control it; but when you’re leading a seminar, it has a life of its own,” he says. “You have to constantly be attentive to what the students are articulating. You have to keep on top of the conversation and steer it in a profitable way” — kind of like living, fast-paced human chess. “It is much more mentally draining,” the tutor smiles, “but it’s also much more stimulating.”