Anniversary of the Death of Rev. Thomas A. McGovern, S.J.

One of the College’s beloved former tutors, Rev. Thomas A. McGovern, S.J., died on February 19, 1985. A graduate of the Université Laval in Quebec, Fr. McGovern previously taught at Canisius College in Buffalo, N.Y., before coming to Thomas Aquinas College in early 1972. He served as a member of the faculty and, later, the Board of Governors until his death in 1985. The following year he posthumously received the College’s highest honor, the Saint Thomas Aquinas Medallion.

Alumni from the early years remember well Fr. McGovern’s meticulously crafted and edifying sermons. To this day he remains a presence on campus. Each fall at the freshman orientation the College’s incoming students read one of his essays, Liberal Education and Freedom. His insightful words help to provide them with the understanding that will carry them through their next four years of learning:

The natural effect [of the College’s program] is not good accountants, or good carpenters, or good musicians, but good men. Such education tends to be regarded as impractical, but the fact is that a people cannot long neglect the type of questions it raises and answers except at that people’s own peril, for such matters are basic to the good life.

May his and all the souls of the faithfully departed, through the mercy of God, rest in peace. 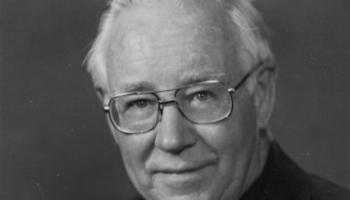