Feast of St. Teresa of Calcutta

A beloved saint of modern times, St. Teresa of Calcutta is also one of Thomas Aquinas College’s most memorable Commencement speakers. (See text and video of her address.)

While touring the United States in 1982, St. Teresa visited just three campuses: Harvard University, Georgetown University, and — at the request of her friend Rev. John Hardon, S.J. — Thomas Aquinas College. She served as that year’s Commencement Speaker and, like Fr. Hardon before her, received the College’s highest honor, the Saint Thomas Aquinas Medallion. (Like St. Teresa, the late Fr. Hardon’s cause for canonization is currently under way.)

At the time of her visit, there was little doubt in anyone’s mind that all who were gathered that day were in the presence of a saint. While delivering her Commencement Address, St. Teresa fingered her rosary the whole while. Flanked on all sides by College faculty and members of the Board of Governors, the tiny nun from Calcutta wore only her simple white and blue sari and a plain gray sweater (against the “cool” — by Indian standards — Southern California day). Though extreme security measures, weeks in the planning, were taken to assure Mother’s safety, she seemed unaware of it all, focusing instead on the 22 graduates of the Class of 1982 and the message she wished to deliver to them.

Class of ‘82 graduate, Katie (Blewett) Masteller recalls the blessed occasion: “It was a privilege like no other to have had St. Teresa with us for our graduation day. Her call to love Christ in all men — especially the unborn — struck a chord with each of us. We were celebrating the successful completion of a rigorous academic program in which we drank deeply from the Church’s rich intellectual heritage. Mother’s words put our accomplishment in perspective: great and praiseworthy as it was, we were reminded we would gain nothing if we had not love.”

Following St. Teresa’s Address, the Chairman of the College’s Board of Governors at that time, Mr. Thomas P. Sullivan, presented her with the Saint Thomas Aquinas Medallion.

“The Governors of Thomas Aquinas College, on behalf of the College community,” Mr. Sullivan announced, “award to Mother Teresa the Saint Thomas Aquinas Medallion as a token of their respect and esteem and to recognize and honor her for her extraordinary dedication to God and the Catholic Church as demonstrated in her life and work. In her overwhelming love of the poorest of God’s creatures, she has manifested the deepest meaning of the Gospel and the life lived for Christ through Mary, and has brought that message through her words and actions to a spiritually hungry world.”

President Emeritus Dr. Ronald P. McArthur later reflected that, “Mother Teresa gave our young people wisdom and counsel to guide them throughout their lives and advice on how to express their love of Christ through Mary by helping their neighbors, by strengthening their family life, by lighting a new light: the Light of Christ in our times. In addressing the graduates of Thomas Aquinas College, Mother Teresa was speaking to all young people, to all of us.”

Throughout the years the College’s connection to St. Teresa has continued. In 1991, wheen Dr. Thomas E. Dillon was appointed as the second president of Thomas Aquinas College, St. Teresa responded to an invitation to his inauguration with a letter from India — now a relic of one of the blessed in heaven. Unable to attend the festivities, she wrote to extend her congratulations and a loving admonition: “Be God’s hands to serve those entrusted to you and His heart to love them.”

An alumna of the College, Maggie Isaacson (’86) — now Sr. Marcella, M.C. — has gone on to join St. Teresa’s Missionaries of Charity. Like all of St. Teresa’s sisters, Sr. Marcella has taken the vows of poverty, chastity, and obedience and an additional vow to serve “Christ in his distressing disguise,” as St. Teresa had explained in her Commencement Address at the College. “In our congregation we take a fourth vow of giving wholehearted, free service to the poorest of the poor. By this vow, we are specially bound to the people who have nothing and nobody, and [we], also, fully depend on Divine Providence.”

“Mother will always have a ‘mother’s place’ in the heart of every Missionary of Charity,” Sr. Marcella says, “as well as a central place in our religious congregation. The M.C. vocation is to satiate the thirst of our Crucified Spouse for love and for souls as He disguises Himself in the poorest of the poor. Mother always wanted her Missionaries of Charity to be true to their name, and she never ceased to set before her spiritual children the means to become true Missionaries of Charity through intimacy with Jesus in the Eucharist and through tender and childlike devotion to Our Lady.

On August 26, 2010, as the world celebrated St. Teresa’s 100th birthday, the College scheduled a special mid-day Mass in her honor in Our Lady of the Most Holy Trinity Chapel.The Mass, which was publicized beforehand in both local and national Catholic media, was open to the public and well attended. College Chaplain Rev. Cornelius Buckley, S.J., served as the principal celebrant, joined at the altar by Chaplain Rev. Paul Raftery, O.P. During the Mass, enlarged photographs from St. Teresa’s 1982 visit stood within the sanctuary as well as in the loggia just outside the Chapel, where holy cards and transcripts of her 1982 Commencement Address were made available. “As Mother Teresa told the students in 1982, the fruit of love is action,” said Fr. Buckley in his homily. “We must put our love for Jesus into living action. Strive to become, work to become, pray to become a poet in action.”

Six years later, when His Holiness Pope Francis canonized St. Teresa, the College celebrated once more. At the of that day’s 9:00 a.m. Sunday Mass in Our Lady of the Most Holy Trinity Chapel, Head Chaplain Rev. Paul Raftery, O.P., blessed a bronze bust of the new saint. The bust, which regularly resides in St. Bernardine of Siena Library, was a gift to the College memorializing St. Teresa’s 1982 visit. Additionally, the College presented to all of its students and staff Miraculous Medals that were blessed and placed on St. Teresa’s tomb — a.gift of Sr. Marcella, M.C. Later that afternoon in St. Joseph Commons, the College presented a video of St. Teresa’s 1982 Commencement Address, as well as a video of her remarks at the 1994 National Prayer Breakfast, during which she gave an eloquent defense of the unborn — “the poorest of the poor” in an otherwise prosperous nation. 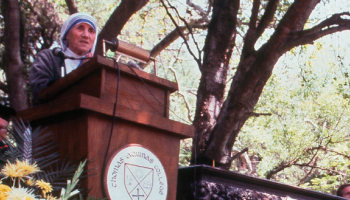