College Awards its Highest Honor to the Most Rev. Salvatore J. Cordileone

Below are the remarks delivered by College President Michael F. McLean before Chairman of the Board of Governors R. ScottTuricchi awarded the medallion: 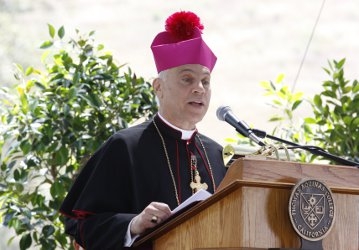 It is a great honor and a real pleasure to welcome back to our campus today the Archbishop of San Francisco, the Most Rev. Salvatore Cordileone.

In 2008, when His Excellency served as the Auxiliary Bishop of San Diego, he offered the opening Mass of our new academic year and presided at our matriculation ceremony. The following spring, he concelebrated the Mass for the Dedication of Our Lady of the Most Holy Trinity Chapel, and the next morning, offered the first Mass in the ordinary form in the new chapel, in our customary Latin and English format. Seven years have gone by since then, and so we are delighted you could be with us again today as our Commencement Speaker.

Archbishop Cordileone was born in San Diego and earned his B.A. in philosophy from the University of San Diego in 1978, having already entered St. Francis seminary a few years before. He earned a second bachelor’s degree in sacred theology from the Pontifical Gregorian University in 1981 and was ordained to the priesthood in July of 1982. From 1985 to 1989, he continued his studies at the Gregorian University, earning a doctorate in canon law.

In 1990 he was appointed Judicial Vicar for the Diocese of San Diego. A few years later, he returned to Rome to serve as an assistant to the Supreme Tribunal of the Apostolic Signatura, the Church’s highest court. In 2002, Pope St. John Paul II appointed him Auxiliary Bishop of the Diocese of San Diego, where he served until his appointment in 2009 by Pope Emeritus Benedict XVI as Bishop of Oakland. In July of 2012, Pope Benedict appointed him as the ninth Archbishop of San Francisco, where he was installed a few months later.

Archbishop Cordileone chairs the United States Conference of Catholic Bishops’ Subcommittee for the Promotion and Defense of Marriage, and in that capacity has been a champion for natural marriage. He also sits on the Committee for Canonical Affairs and is a member of the Governing Board of the International Theological Institute as well as the Bishops’ Sub-commission on the Liturgy for the Anglican Ordinariates.

Over the years that we have known Archbishop Cordileone, and throughout his priesthood, His Excellency has lived up to his surname which, translated literally, means “heart of a lion”: He has been courageous in proclaiming the truths of the Faith and fearless in explaining the Church’s moral teachings as they are grounded in the natural law. And in imitation of the Good Shepherd, he cares for his flock with a pastor’s heart.

Therefore, at the recommendation of our faculty and by resolution of the College’s Board of Governors, we will award His Excellency today our highest honor, the Saint Thomas Aquinas Medallion.