Below are the remarks delivered by College President Michael F. McLean before Chairman of the Board of Governors R. ScottTuricchi awarded the medallion: 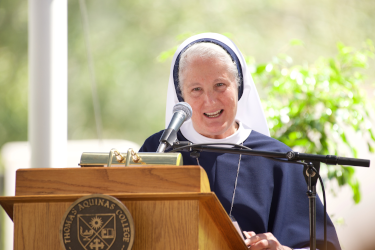 On this day when we celebrate the 100th anniversary of Our Lady’s first apparition at Fatima, it is edifying to know that the Class of 2017 has chosen Our Lady of Fatima as its patroness. In her messages to the three young visionaries, two of whom were canonized today by Pope Francis, the Blessed Mother sought to warn the world of the errors that would come forth from the regime of atheistic materialism taking hold in what soon would be the Soviet Union.

While the Soviet Union is no more, one of the bitter fruits of Communism has nevertheless endured: abortion — the slaying of the most innocent among us.

Our Commencement Speaker today has devoted her life to the defense of these innocents — and to the care of their mothers. Mother Agnes Mary Donovan is the Superior General of the Sisters of Life, a religious order founded in 1991 under the inspiration of the late John Cardinal O’Connor of New York.

As a “contemplative/apostolic” community, the Sisters of Life have as their primary work prayer on behalf of vulnerable human life. In their active apostolate, they provide housing and practical resources for women and their children, as well as hope and healing for mothers in crisis. They also offer a variety of retreats to uphold and advance the Culture of Life.

Mother Agnes Mary entered the Sisters of Life at its inception and has served as Superior General of the order since 1993. In the years prior, she earned a Ph.D. in psychology from the University of North Carolina at Chapel Hill and was a member of the faculty and professor of psychology at Columbia University and the College of William and Mary. She also served as an academic and clinical psychologist, focusing on family intervention, mother/child relationships, and children with special needs. Clearly, God prepared Mother well for her consecrated mission!

In addition to serving as Superior General of the Sisters of Life, Mother Agnes Mary is also the Chairperson of the Council of Major Superiors of Women Religious, a collaborative body of women religious committed to the “full flowering” of religious life in the United States, in complete accord with the Magisterium of the Church.

Before we have the joy of listening to Mother Agnes Mary’s Commencement Address, the chairman of our Board of Governors, Mr. Scott Turicchi, will present her the Saint Thomas Aquinas Medallion.