Below are the remarks delivered by College President Michael F. McLean in presenting the Medallion:

Nearly every year since our first commencement in 1975, we have taken a moment during the graduation ceremony to pay tribute to those who have faithfully served Christ and the Church in an extraordinary way. This is a fitting time to do so, for we hope that as our graduates go forth from the College, they will emulate our honorees in their own lives.

Today we recognize three individuals for the significant roles they have played in founding institutions that are fortifying our Church and our culture. In so doing, they are important examples of how humble cooperation with God’s plan yields great fruit. 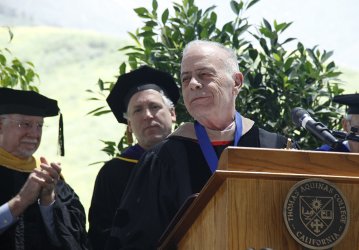 Our first recipient is Mr. Peter DeLuca, one of the founders of Thomas Aquinas College and a man who has devoted his life to this institution. So integral was he to the founding of the College that our first president, Dr. Ronald McArthur, has said of his onetime student, “This college simply would not exist were it not for Peter DeLuca.”

Not only does Mr. DeLuca have a love for the program of Catholic liberal education that is at the heart of Thomas Aquinas College, he also has a business and financial acumen that has been indispensible to the school from the earliest days of our existence. As a consequence he has served not only as a tutor these past four decades, but he has held nearly every senior administrative position at the College and overseen the construction and maintenance of our beautiful campus. Moreover, following the sudden death of Dr. Dillon, Mr. DeLuca graciously and ably responded to his fellow Board members’ request that he serve as our third president. We will always be particularly grateful to him for the leadership he provided our community at that time, even as he mourned the loss of a dear friend.

We are pleased indeed to honor Mr. DeLuca today and to thank him for the many sacrifices he has made to help bring about Thomas Aquinas College and to sustain it these 40 years. 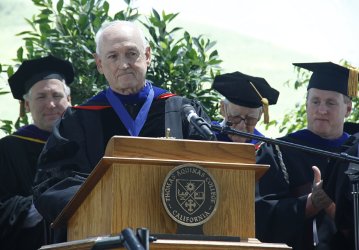 Our second recipient is also a founder of Thomas Aquinas College, Dr. John Neumayr, who like Mr. DeLuca has dedicated his life to the furtherance of Catholic liberal education.

As a young graduate of the University of Notre Dame, Dr. Neumayr had the good fortune to meet Dr. McArthur, who advised him to study with his own mentor, Dr. Charles de Koninck, at Laval University in Quebec. Under de Koninck’s guidance, Dr. Neumayr’s discipleship to St. Thomas Aquinas took root, as did his desire to help young people embrace the thought of the Angelic Doctor and emulate his virtues.

Thus, in collaboration with our other founders, he set forth the principles on which Thomas Aquinas College was established. The resulting document, entitled A Proposal for the Fulfillment of Catholic Liberal Education, has — without alteration — been the governing document of the College ever since. Dr. Neumayr also laid out the curriculum of the College in our Bulletin of Information, a fully integrated program of the liberal arts and sciences, to which only minor refinements have been made over the years.

For the wisdom and care that he brought to our founding, and for his service as a tutor, our first dean, and a member of our Board of Governors, we are profoundly grateful to Dr. Neumayr, whom we honor today with the Saint Thomas Aquinas Medallion. 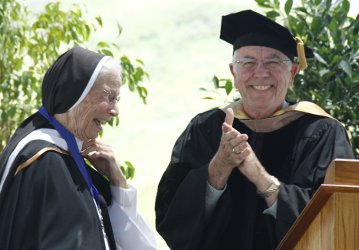 The third recipient of the Saint Thomas Aquinas Medallion is also our Commencement Speaker, Mother Mary Assumpta Long, and it is indeed a great honor to have her with us on this joyful day. Mother Assumpta has been a friend of Thomas Aquinas College since its earliest years. Though not directly associated with the College, Mother nevertheless has been our collaborator from afar, in spirit and in prayer, and we are deeply grateful to her for her encouragement over the years.

Mother Assumpta is also a founder — not of a school, but of a religious congregation, the Dominican Sisters of Mary, Mother of the Eucharist, established with the patronage of Tom Monaghan in Ann Arbor, Mich.

Mother has given her life to teaching and spreading the Gospel in the great tradition of her spiritual father, St. Dominic. Because of her zeal for souls, her fidelity to Christ, and her tireless hard work, the congregation of just four sisters that she established in 1995 has grown in only 15 years to more than 100, two of whom, I am proud to say, are graduates of Thomas Aquinas College. The hallmark of these sisters is joyful devotion to Our Lady and to her Son in the Blessed Sacrament.

With more vocations now than their motherhouse can accommodate, the Sisters of Mary, Mother of the Eucharist, are in high demand by schools across the country. They can now be found in classrooms in South Carolina, Florida, Texas, Arizona, and here in California. Because of their fidelity to Christ and His Church, they are attracting more and more young women to live their consecrated life and to further the work of genuine Catholic education. Their influence is growing, and twice even, in recent years, they have been featured on the “Oprah Winfrey Show,” generating international interest in their lives of poverty, chastity, and obedience.

It is a great joy for us to have Mother Assumpta with us today and to bestow on her the Saint Thomas Aquinas Medallion.