An Interview with Dr. Michael Augros (’92)

Note: In May Ignatius Press published Who Designed the Designer? A Rediscovered Path to God’s Existence by Dr. Michael A. Augros (’92), a graduate of Thomas Aquinas College and a member of its teaching faculty. Who Designed the Designer is a direct, concise antidote to the “New Atheist” arguments against the existence of God. The book draws upon universal principles to demonstrate the logical necessity for an intelligent, uncreated first cause of the universe. In so doing, it relies heavily on the works of Aristotle and St. Thomas Aquinas, placing a renewed emphasis on great minds that have thus far received little attention in the ongoing public debates about theism, intelligent design, and evolution. The result is a profound yet highly accessible investigation, beginning with the world as we encounter it and ending in the divine mind. Below is an interview with the author. 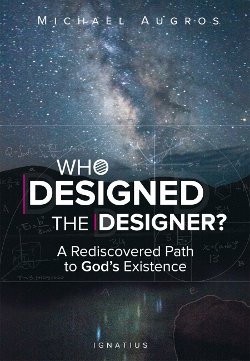 There are already many “God exists” books out there. What made you decide to write one more?

Most of the popular “There is a God” books right now are science-based, making “fine-tuning” arguments from astrophysics, or “irreducible complexity” arguments from biochemistry. My book is different. It does not ignore science, but it does not found its argument on science. My book is an elaboration of Romans 1:20, in which St. Paul says that the wise among the gentiles are without excuse for denying certain attributes of God because the evidence for those things is all around them. That statement does not seem to be talking about, say, biochemical arguments for the existence of a Designer. It refers to evidence that is around us in a more tangible way, and that is the sort of evidence I wanted to consider in this book.

There are also some popular, philosophically reasoned “God books” out there, but mine differs from those as well. First, it is the development of a single argument. It is linear. Most of the other philosophical books will give you several different arguments for the existence of God — plus arguments about the immortality of the soul, or the nature of marriage, or euthanasia. They present a whole worldview, whereas my book is more tightly focused.

Those books also tend to be written as a response to the new atheism movement, spearheaded by Richard Dawkins and his book The God Delusion, which came out in 2006. I completed the first draft of my book in 2003. So this is not a response book or an attack. Its prime motivation is that this sort of project is worthwhile in its own right. It is something beautiful.

You have written the book in such a way that its premises are all drawn from observations that readers can verify for themselves. Why?

Science-based arguments begin from painstaking observations and theories developed by great authorities who are world-renowned experts. There is an obvious advantage to that approach, and I do not disparage the science-based books — I regard ours as complementary projects. But the layperson, and even a scientific reader, is going to have to accept many of the premises in science-based arguments purely on the basis of authority. There are going to be premises in the argument that the reader simply has to trust, has to believe to be true.

The corresponding advantage to my book is that the arguments that it develops, which come from thinkers such as Aristotle and Aquinas, begin from statements that anyone can verify from ordinary experience — such as, “A cause can’t give what it doesn’t have,” or “If something acts upon itself, it must be distinguishable into a part that’s acting and a part that’s being acted upon.” So readers need not trust somebody else’s assertions.

Please explain the title, Who Designed the Designer.

The question is not my own invention. It is a catchphrase. Christopher Hitchens asked that question, and it expresses a problem that Richard Dawkins has formulated perhaps better than anybody else. In recent decades a lot of people have been arguing that there has to be a designer behind the world of nature, especially animate nature, living things, because they are so astonishingly complicated, and complexity of a certain kind requires a designer.

An opponent, like Richard Dawkins, objects something like this: “Your designer sounds like he has to be pretty smart if he can design the world of living things. He must have a brain, and it must be the most complex brain that there is. So, by your own principles, he needs a designer himself, and therefore you have explained nothing and you are stuck in an infinite regression.”

That makes sense if you are thinking about a human mind. Our thoughts are so weak that each one enables us to understand only one thing distinctly, such as “eagle,” or else many things without seeing the differences among them, such as “animal.” To understand many things in their details we therefore have to change our minds and think about one thing, then another, and then something else. This requires a certain complexity of thought. But if we assume that the designer has a human mind or even a brain, we are anthropomorphizing. And we see even among ourselves that it is not the wiser mind that takes more words to explain something — the wiser and sharper mind can say more with fewer words. Our students here at the College learn that a demonstration, although it is a very short argument, causes greater understanding of things than an induction made from a great number of instances. The supreme mind should therefore be the simplest of all, understanding all things in all of their richness and diversity, without any complexity on the part of its own thought. Our students also learn from Boethius that the mode of knowledge does not have to agree with the mode of the thing known — it is possible to have a present understanding of past things, an unchanging understanding of changing things, and a simple understanding of complex things.

Absolutely. That was in part why it took so long to finish the book, because it was really doing two things. It was making a case for the existence of God, but because I was going to do that through philosophy, I had to rehabilitate philosophy for a general readership at the same time.

There are a lot of quack philosophers out there who play mind games and do not pretend to be doing more than that. Philosophy is also often regarded as merely linguistic analysis or analysis of science, as if other people do the work of trying to understand reality, and philosophers just sit around talking about what those people are doing. That is not the original understanding of philosophy, and it was important to demonstrate that this was not that kind of book. There are certain questions that philosophy can address that empirical science cannot, and I am trying to re-establish that in some way and show what that means.

You state that, for the most part, you are re-presenting the arguments of Aristotle and St. Thomas. Why should readers not just go directly to those sources?

Well, I’m hoping that some will eventually! But if you begin by picking up Aristotle and Aquinas, and you have no training in philosophy, good luck understanding them. They have a foreign vocabulary, a foreign worldview, and they are assuming many things on your part. The Summa Theologiae is ostensibly written for beginners, but St. Thomas’s understanding of a “beginner” is someone who has already gone through formal training in all of the liberal arts and philosophy, and who has carefully read all of Scripture, and possibly the Church Fathers. If you lack this preparation, you are likely to misunderstand what St. Thomas has to say.

This book also makes use of personal anecdotes and the like, and that is something that you would never find in Aristotle or Thomas. A book written for a wide audience needs to be more engaging to the imagination and, to some extent, the emotions. I wanted to show that everyday goings-on in life can be illustrative of universal principles, or can prompt us to think and wonder philosophically.

Also, while the works of St. Thomas and Aristotle implicitly contain the answers to the difficulties with theism posed by modern philosophers, they do not respond to them directly. The same is true for questions that arise from modern science. In writing this book for modern audiences, I tried to address Aristotle and Aquinas’s arguments to these more recent concerns. So the book is not simply a summary or a rerun!

The passage on beauty stands apart from your book’s otherwise sequential narrative. What was your reason for including it?

I set out to show that, from things readers can know or verify for themselves, we can determine that there must be an intelligence behind the natural world. Once we can see that, we can explain many other things about the natural world, such as beauty, without having to go through arguments from them separately to the existence of a first cause that is intelligent.

I wanted readers to see that there are many different philosophical paths to this first being, not just one. Many different trails converge on this first intelligence. The evidence for God’s existence is, in some ways, all around us, and we see it all the time.

You write often about your students. What role did they play in helping you create this book?

One of the reasons I say that I don’t think I would ever quit teaching, even if I won the lottery, is because I continue to learn by teaching. My students help me to see where their minds are when they come to me, and how the books that are so familiar to me look to them, or how jargon can create false (even humorous) impressions among readers unfamiliar with the vocabulary of my discipline. Without my students I don’t see how I could know these things. You cannot just sit in a room and deduce what is going to be pedagogically effective and what is not. You need experience for that.

Do you have any other projects in mind for the future?

I am currently writing a book about the soul. In Who Designed the Designer?, God figures prominently, and the soul is implicitly there, but in the background. The reader may start to wonder, “If God has an incorporeal mind, maybe our mind is incorporeal, too, and it can exist without the body,” but that is secondary. In the next book the order is reversed. The immortality of the human soul is what is prominent.

That’s the idea. I started on it when I submitted Who Designed the Designer to Ignatius Press in 2013, so I have been working on it for a few years now. As usual my students are helping me with it, and also my father and one of my brothers, who give me very helpful feedback without which I don’t think I could write a book.