A Pilgrimage for a Departed Sister — and Intercessor for Life

For many years Madalene Baird has wanted to hike in the Los Padres National Forest, just outside the California campus of Thomas Aquinas College, to see for herself the place where her sister Angela (’00) died in 1997. Last week, she finally got the opportunity.

“I had always thought that if I ever come to Southern California again, I would go do that hike, and then a friend invited me to visit,” says Madalene, the director of religious education at her parish in Walla Walla, Washington. “We had talked about coming out sometime around the second weekend of November, and I pulled up the calendar to see what that Friday was. I stopped when I saw the date: November 6” — exactly 23 years after Angela’s death.

“It hit me really hard,” she says. “I thought, ‘This cannot be a coincidence. It would be so beautiful to do the hike on the anniversary.’”

On November 5, 1997, 19-year-old Angela Baird and a group of fellow TAC students were taking advantage of a mid-semester break to go camping when she slipped on some rough terrain and plunged 60 feet down a rocky, sheer cliff. She died early the next morning in an operating room in neighboring Ventura.

But there is much more to Angela’s story. 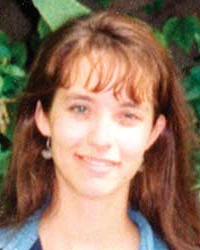 Angela Baird (’00)So dear to her heart was the pro-life cause that she led her fellow TAC students at weekly prayer vigils outside a nearby abortion clinic. On the night of her death, she prayed for the unborn as she lay at the bottom of that ravine in the Los Padres National Forest, waiting with two friends for the paramedics to arrive. She offered her suffering for the babies who may never live to be born.

Six years to the day after her death — on November 6, 2003 — when a new generation of TAC students were making their weekly trip to the same abortion clinic where Angela once prayed, they learned the wonderful news that the facility was closing its doors for good. Ever since, the Thomas Aquinas College community has regarded her as a special intercessor, or patroness, for the unborn.

As does her family. Angela was the sixth of 10 children, and Madalene, the youngest, was only 8 years old when she died. “I remember Angela with so much love. She was very special, and the pain of losing her has really stuck with me all of these years,” Madalene says. “In the back of my mind  I often wonder if God is calling  me to do pro-life work. I feel a very deep connection with my sister in that cause.”

And so on the 23rd anniversary of that night, Madalene became the first member of the Baird family to trace the route of Angela’s last steps along the Punch Bowls Trail and visit the cross that now marks the place of her death. Among the rocks she placed two pages of written prayer intentions, compiled by their mother, and said a number of prayers for, and to, her beloved big sister. Upon returning to campus, she and her friend prayed some more in the Guadalupe Chapel, where Angela spent many hours in the weeks before her death. “I was deeply impacted that I was able to make that trip,” Madalene recalls. “It was really, really special.”

For Madalene, the hike was not merely a sentimental remembrance or the solemn observance of an anniversary. Angela’s intercessions, she is convinced, are efficacious — and offered abundantly. “We have so much to pray for in our country, and in our family, and Angela wants to be part of it,” she says. “She wants to pray for it. I look at this hike as a pilgrimage on the part of my family and others who need her prayers.”