In keeping with His Holiness Pope Francis’s call for a Year of Consecrated Life, Thomas Aquinas College has selected as its 2015 Commencement Speaker one of the preeminent women religious in the United States, Sr. Regina Marie Gorman, O.C.D.

The vicar general of the Carmelite Sisters of the Most Sacred Heart of Los Angeles, Sr. Regina Marie has graciously accepted President Michael F. McLean’s invitation to serve as this year’s speaker. “For more than 40 years, Sr. Regina Marie has lived faithfully the life of a religious, all the while serving her community and women religious throughout the United States in various leadership roles,” says Dr. McLean. “I am confident that her remarks will be a source of inspiration for our graduating seniors, for their families, and for us all.”

Sr. Regina Marie is the former chair of the board of directors for the Council of Major Superiors of Women Religious (CMSWR), a national organization of religious communities that is faithful to the Holy Father and the magisterium. For this work, as well as for her decades of service to the Church, the College will award Sr. Regina Marie with its highest honor, the Saint Thomas Aquinas Medallion, at Commencement.

The Return of Fr. Illo 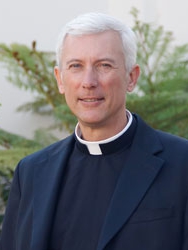 The May 16 Commencement exercises will begin, as is the College’s custom, with a Baccalaureate Mass for graduates and their families. Serving as the principal celebrant will be a dear friend of the College, Rev. Joseph Illo, who was a chaplain at the College from 2012 to 2014, and who knows well the members of the Class of 2015.

For the last year, Fr. Illo has served as the pastor of San Francisco’s Star of the Sea Parish, where, at the request of Archbishop Salvatore Cordileone, he is working to establish a new oratory. He has kept in touch with the College's students, hosting some 200 of them for a barbeque dinner at Star of the Sea when they traveled to San Francisco in January for the Walk for Life West Coast.

“We look forward to welcoming Fr. Illo back to campus,” says Dr. McLean. “We are grateful that he is coming to join us and that, once again, he will offer the Holy Sacrifice of the Mass in Our Lady of the Most Holy Trinity Chapel.”

Sr. Regina Marie Gorman, O.C.D., holds a master’s degree in theology and Christian ministry from Franciscan University of Steubenville, Ohio. She has lived out her calling as a Carmelite sister for more than four decades. For nine years she taught at junior high schools in and around Los Angeles, after which she served another nine years as her community’s directress of novices and postulants. She then became its directress of vocations, before being named its superior general, a position she held for 12 years.

Today, as vicar general for the Carmelite Sisters of the Most Sacred Heart of Los Angeles, Sr. Regina Marie oversees a thriving religious community that operates a convalescent home in Duarte and a retreat house in Alhambra, and whose members teach in schools in the Archdiocese of Los Angeles. Over the years she has also developed a national reputation as an inspiring speaker and a much sought-after retreat leader.

Last fall Sr. Regina Marie stepped down as chair of the Board of Directors of the Council of Major Superiors of Women Religious in the United States. Established in 1992, the CMSWR exists to promote cooperation with faithful religious orders throughout the United States. It encourages collaboration among its members, education about the teaching of the Catholic Church on the religious life, and unity with the Holy Father and the United States Conference of Catholic Bishops.

As part of the 2015 Commencement Ceremony, the chairman of the College’s Board of Governors will present Sr. Regina Marie with the Saint Thomas Aquinas Medallion in recognition of her extraordinary dedication to God and His Church. Established by the Board in 1975, the Medallion is a means of honoring Catholics who have demonstrated unfailing adherence to the Magisterium and who have used their influence to advance the Church’s teachings. Past recipients include Bl. Mother Teresa, M.C., and Servant of God Rev. John Hardon, S.J.

“We deeply admire Sr. Regina Marie’s faithfulness to Christ and the Church, the joy with which she lives her vocation to the consecrated life, and her leadership of the Council of Major Superiors of Women Religious,” says Dr. McLean. “We are pleased to honor her lifetime of fidelity, and to hold her out as an example for our graduates as they discern God’s call in their own lives.”

The Commencement Ceremony, the 41st in the College’s history, will be held on campus on Saturday, May 16, at 11:00 a.m. It is open to the public.