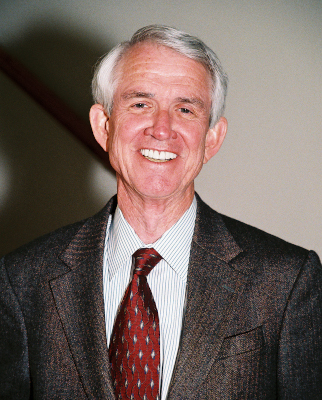 Please pray for the repose of the soul of Thomas P. Sullivan, who died on Saturday, March 27. The first chairman and a longtime member of the Thomas Aquinas College Board of Governors, Mr. Sullivan was a friend and benefactor of the College since its earliest days.

“Thomas Aquinas College has lost a very good friend and generous benefactor. Tom helped lead the College in its early years when the fledgling institution was working very hard to establish itself. He oversaw the move from Calabasas to Santa Paula and the initial establishment of the College’s campus on the Ferndale Ranch,” says President Michael F. McLean. “Tom continued to serve on the Board in the years following his chairmanship and was a mentor and inspiration to all of the College’s presidents. His unfailing optimism and steadfast faith were important parts of the College’s success, and his prudence and good judgment helped guide the College through some difficult times. The College will miss Tom, but we are confident that he will continue to intercede vigorously on its behalf.”