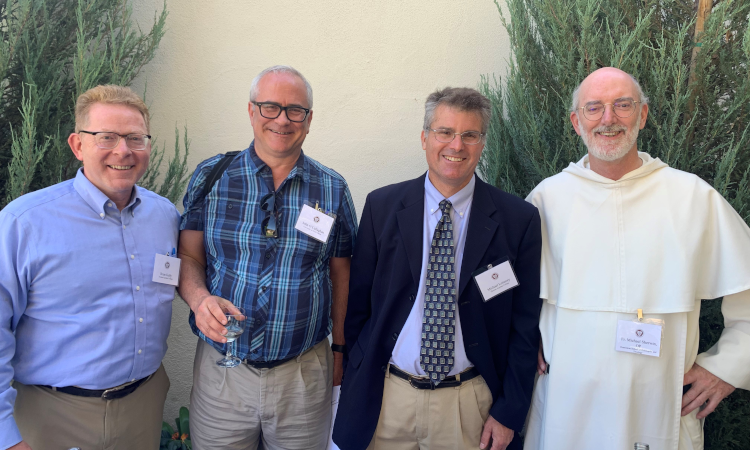 Strengthening the bonds of fellowship between contemporary Thomists, Thomas Aquinas College hosted about 60 participants for its first-ever Thomistic Summer Conference last month, reviving a cherished dream of one the College’s best oldest and benefactors, the late Ralph McInerny.

A devoted disciple of St. Thomas, Dr. McInerny for several decades sponsored summer conferences at the University of Notre Dame. “Ralph wanted Thomists, both young and old, to share their ideas, to encourage one another in their academic work, and to develop friendships with each other,” says Dr. John J. Goyette, dean of Thomas Aquinas College, California. As one of several alumni to participate in those conferences over the years, Dr. Goyette was saddened when they were discontinued for lack of funding. “We can’t let this die,” he recalls thinking at the time.

But years later, with the College’s first Thomistic Summer Conference now concluded, it would seem that Dr. McInerny’s dream had not died: It was simply dormant.

“There aren’t a lot of schools promoting the study of St. Thomas,” explains Dr. Goyette. “It’s a small universe.” The conference was an opportunity for fellow Thomists to meet, share their ideas, and think together about how the Angelic Doctor’s thought can face the challenges of modern philosophy and modern science.

Celebrating one of St. Thomas’s signal achievements, the College asked each scholar to reflect on faith and reason, which exhibit tensions all too often deemed hopelessly dissonant, but which St. Thomas gracefully and creatively harmonized. When they at last arrived on campus, 27 presenters identified echoes of that harmony across a vast spectrum of subjects. Papers included “Libertas: Divine Law and the Nature of Liberalism”; “The Physics of a Natural Philosopher: Pierre Duhem and Charles De Koninck on Science, Philosophy, and Faith”; and “Jordan Peterson, God, and Christianity.”

“Not everyone who came to the conference agreed on everything,” says Dr. Goyette, “but they shared so much in common, and there was such an atmosphere of friendship, that when they did disagree, they disagreed amicably. In fact, it was good for younger scholars to realize that the older scholars didn’t agree about everything, because seeing why they disagree is very helpful.”

Several of the College’s own tutors contributed papers, as well. Dr. Goyette addressed the philosophical grounds for the dogma of the Trinity in “The Interior Word as Preamble and Analogy in St. Thomas’s Trinitarian Theology.” Dr. Joseph P. Hattrup spoke on “Philosophy as Conversion and Purification,” and  Dr. John F. Nieto lectured on “Faith Takes Reason Captive.”

After spending most of each day in lectures and discussions, conference guests gathered for fine dinners, as well as cocktails and fellowship in the mild California twilight. Refreshed, they then returned to the St. Cecilia Lecture and Concert Hall in the evenings to hear from the conference’s featured speakers, all esteemed exponents of contemporary Thomism — and all, noted Dr. Goyette, erstwhile participants in Dr. McInerny’s original summer conferences. Dr. John O’Callaghan spoke on “Philosophy after Christ”; Dr. Steven A. Long spoke on “The Analogy of Being as the Metaphysical Framework for Sacra Doctrina”; and Rev. Michael S. Sherwin, O.P., spoke on “Faith, Reason and the Desire for Happiness and Fulfilment”.

On the whole, the first Thomistic Summer Conference was a resounding success. Fr. Sherwin remarked, “It was a great privilege to spend those days discussing Aquinas, celebrating the liturgy, seeing old friends, meeting new ones, and promoting the intellectual life in general — and communing with the natural and spiritual beauty of Thomas Aquinas College.”

Michael Grace, a member of the College’s Board of Governors and an erstwhile graduate student in theology, offered even more effusive praise. “It was an extraordinary conference — interesting and well executed and enjoyable. I haven’t felt so grounded in the thought of Thomas since graduate school! I’m still glowing from the ideas shared and the commitment to truth and fellowship from the weekend. Superb!”

Such enthusiasm was a common takeaway among conference-goers: “Tremendously stimulating! I was very struck by the beauty of the campus, and found the papers and discussions extremely fruitful,” said Alan Fimister, a visiting lecturer from St. John Vianney Theological Seminary. Ted Chan, an independent scholar who also lectured at the conference, added: “A wonderful intellectual retreat and very much in the spirit of Dr. Ralph McInerny’s summer colloquia. The campus is very beautiful and serene, a conducive environment for such an event.”

The College is hopeful to make these Thomistic Summer Conferences an annual tradition.