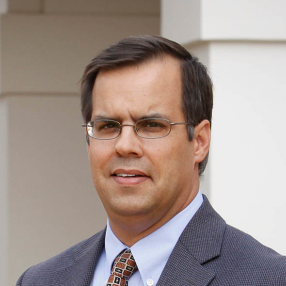 “Dr. Goyette has served the College ably as a tutor since 2002,” said Dr. McLean. “He is eminently qualified, having previously served as assistant dean for student affairs and as a member of the Admissions and Instruction committees. I am very confident that he will serve the College admirably in this new position.”

The selection, made after extensive consultation with the Faculty Advisory Committee for the Selection of the Dean, numerous conversations with members of the faculty, and much deliberation, was approved unanimously by the College’s Board of Governors. Dr. Goyette formally assumed the responsibilities of dean on July 1, 2017.

“I am honored to be asked to serve as the next dean of Thomas Aquinas College,” said Dr. Goyette. “I am committed to working with the faculty to continue to offer a truly Catholic liberal education, an education pursued under the light of faith and guided by our patron, St. Thomas.”

Dr. Goyette came to Thomas Aquinas College as a student in 1986 and graduated four years later. He went on to earn master’s and doctoral degrees in philosophy at The Catholic University of America, then served for eight years as a professor of philosophy at Sacred Heart Major Seminary in Detroit, before returning to his alma mater as a member of the teaching faculty in 2002. He and his wife, Rebecca — a fellow member of the Class of 1990 — are the parents of nine children.

As dean of the California campus Dr. Goyette supervises the College’s unique program of Catholic liberal education, makes class assignments, and is responsible for the general welfare and discipline of students. He also chairs the Instruction and Curriculum committees and oversees a wide range of College programs, from student activities and alumni relations to the chaplaincy and faculty hiring.