Work Begins on New England Sanctuary, with a Link to TAC’s California Past

Years before Thomas Aquinas College came to New England, its then president, Dr. Thomas E. Dillon was overseeing the construction of Our Lady of the Most Holy Trinity Chapel on the California campus. At the same time, Rev. Greg Markey, who now serves as chaplain on the New England campus, was engaged with a similar project: “I was a pastor in Connecticut, reconstructing a church there,” he recalls. “And we were using the same architect that Dr. Dillon was using in California. I only knew Thomas Aquinas College remotely.”

The architect, Duncan Stroik, could see the striking similarity of the visions of the College president and determined clergyman — and put the two men in touch with one another. “I actually talked to Dr. Dillon,” Fr. Markey relates, “just months before he died in the car accident, on the phone … about his vision for the chapel in California.” Little did Dr. Dillon know that this same pastor from the eastern seaboard would one day work to overhaul a second chapel for the College in New England.

Dr. Dillon’s structure is “one of the masterpieces in architecture of the last 50 or 100 years in this country. It’s tremendous,” the New England chaplain remarks. “Now we have this great edifice here that’s impressive in its own right, and we’re trying to do something similar. … We’re communicating the idea that, as Dr. Dillon would have said, this building is the most important building on our campus, and we want it to look appropriate.” 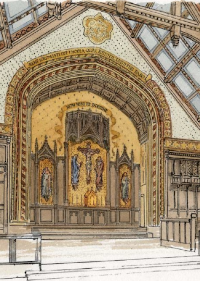 Artist’s rendering of the finished sanctuary in Our Mother of Perpetual Help ChapelThis semester is set to be a busy one for Our Mother of Perpetual Help Chapel. Mountain View, the company responsible for constructing the woodwork in the upper sanctuary, drove up from West Virginia to the College on Sunday, and workers began unloading their trucks at the crack of dawn Monday. “They’ve been carving … for three or four months, and they are ecstatic about this,” Fr. Markey continues. “They’re telling me that this is one of the greatest projects they’ve worked on as a company.”

For the next week, except for during Masses, the current altar will be removed from the sanctuary to make way for the reredos and altar of repose, both of which should be in place by Friday evening. Soon to be the focal point of the building, the ornate backdrop will contain a large crucifix at its center, flanked by carvings of the Blessed Mother and St. John the Beloved. On either side of this Crucifixion scene will stand St. Thomas Aquinas, the venerable patron of the College, and St. John Henry Newman, a champion of the Catholic faith and liberal education.

Soon after, at the beginning of February, Canning Ecclesiastical painters will arrive on campus. After a week constructing their scaffolding, the artists will spend two to three months painting the sanctuary. “Please God,” Fr. Markey says, “by May, at the end of the semester, we’re going to have a completely finished sanctuary: sacristies that will be functioning, altars that are functioning, and everything up and running. And it will look fantastic.”

“It will definitely change both the way I offer the Mass and the way we pray, because beauty is a very important part of Catholic liturgy,” the chaplain concludes. “The Catholic Church has always been a patron of the arts, and always tried to integrate beauty within the liturgy. We’re not puritanical in our approach to this. We are incarnational as a Church. So we need beauty, and high-quality beauty.”