When Thomas Aquinas College acquired the century-old, former site of a New England preparatory school in 2017, it inherited a chapel that was all but perfect for its new campus — grand, beautiful, historic and spacious — save for one important exception: Constructed in 1909 for a school founded by the charismatic evangelist Dwight L. Moody, Russell Sage Chapel was designed for Protestant worship and, as such, lacked many of the essentials for Catholic liturgy.

Aided by a generous gift from an anonymous benefactor, the College has since begun to transform the Chapel for Catholic use. Last year it renamed the building in honor of its new patroness, Our Mother of Perpetual Help, and many more benefactors stepped forward to provide chalices, vestments, holy water fonts, and other key liturgical items. Meanwhile, construction crews have worked on numerous renovations, some large, others small, to make Our Mother of Perpetual Help Chapel a fitting home for Our Eucharistic Lord.

“The character of the Chapel is growing as we’re growing,” remarks Irene Collins, a sophomore on the New England campus, which has seen its student body double in size in just one year. Adds Dean Thomas J. Kaiser, “It’s amazing that this chapel, which suits our needs so well, was built by non-Catholics over 100 years ago. Looking at the design of this whole campus — but especially the Chapel — it seems that God had something in mind for us all along.”

Below is an account of the renovations to the Chapel to date, as well as those still in progress and those on the way: 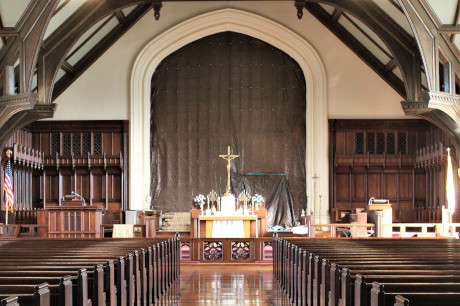 Renovation of the Chapel began in 2019, when workers installed a tabernacle and sanctuary lamp in anticipation of the first regularly scheduled Mass in March. In the following months, an alumnus of the College, George Krestyn (’03), oversaw reconfiguration of the Chapel’s pews, so as to make room for a center aisle to facilitate processions. A large pipe organ was carefully removed from the sanctuary and placed in temporary storage until a more suitable location can be determined. 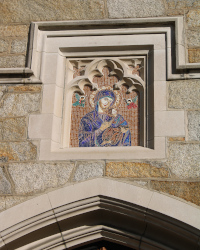 Another project, under way during the first week of classes last fall, was the installation of a mosaic depicting Our Mother of Perpetual Help on the Chapel’s facade. Cape Cod-based artist Michael Ferreira modeled the mosaic on a miraculous image in Rome’s Church of Saint Alphonsus that dates back to at least the 15th Century. The image prominently displays the Chapel’s patroness and serves as a constant reminder of the College’s dedication to its beloved intercessor. 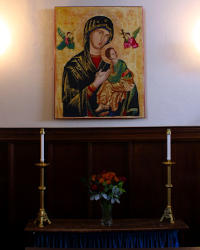 Eventually, a shrine honoring Our Mother of Perpetual Help will stand to the left of the sanctuary. Meanwhile, a beautiful replica of her famous icon can be found there, flanked with candelabra and fresh flowers. Students can often be seen kneeling in prayer before her image, and the space is popular for the community’s evening Rosary and other devotions. 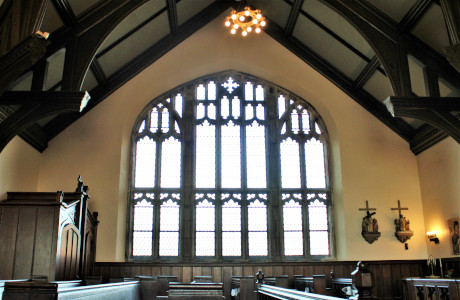 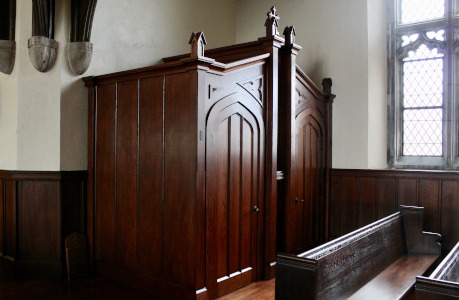 A few weeks later, construction began on two spacious confessionals in the Chapel’s transepts. Built of red oak, the confessionals complement the building’s cruciform design and feature intricate carvings which match the style of the adjacent windows. Before the confessionals’ completion in January 2020, students would descend into the Chapel basement where Chaplain Rev. Greg Markey heard confessions in a makeshift pré-dieu before and after every Mass. 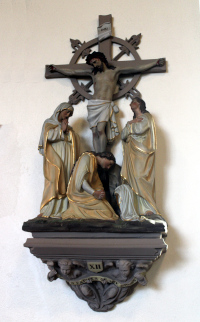 The Stations of the Cross arrived last spring, just in time for Lent. Salvaged from a church in Pittsburgh, the century-old carvings now line the Chapel nave. (The Stations at Our Lady of the Most Holy Trinity Chapel on the California campus have a similar story, having been moved from an abandoned church in Milwaukee, and are of the same vintage.) The elegant artistry of the antiques is conducive to meditation. “The Stations we have here, compared to other churches, are bigger, more detailed, and colored,” observes Peter Goyette (’22) . “There’s less required of your imagination.” 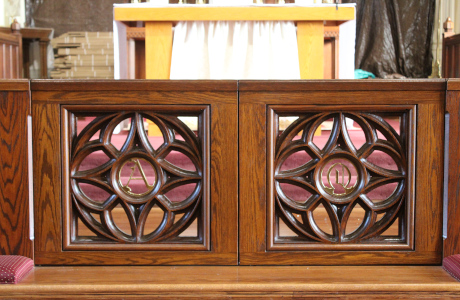 Shortly after the coronavirus forced students home in March, workers installed an altar rail at the front of the sanctuary. “With the communion rail, especially, the Chapel feels more and more Catholic,” reflects sophomore Bridget Stoutz. The rail’s finishing touch came this fall in the form of an altar gate, embedded with the first and last letters of the Greek alphabet, alpha and omega — symbols which Christians have employed since at least the 4th century to represent God’s eternal nature. The carving recalls the prophecy of St. John: “‘I am the Alpha and the Omega,’ says the Lord God, ‘Who is, and Who was, and Who is to come, the Almighty’” (Rev. 1:8). The gate also bears homage to its California counterpart, which, while differing in style from the New England gate, likewise features the same Greek letters.

… and Projects Still Under Way 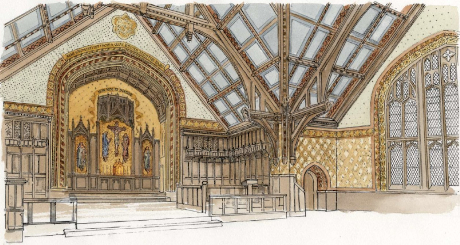 Yet the Chapel’s most highly anticipated renovation is the ongoing construction of an altar of repose against the back wall of the sanctuary. “The Chapel has a perfect spot for the high altar,” says junior Sophie Steigerwald. “It’s going to fit well and it will be better for Catholic worship.” An ornate reredos, standing above the altar, will cover the far wall of the sanctuary and provide orientation to the sacred space. “You want verticality in a chapel so that your eye goes up,” explains Fr. Markey. “Prayer is the lifting of your mind and your heart to God.” The piece will hold a large crucifix at its center, with statues of the Blessed Mother and St. John carved into either side. St. Thomas Aquinas, the College’s venerable patron, and St. John Henry Newman, a champion of the Catholic faith and liberal education, will stand aside the Crucifixion scene.

Many other modifications to the sanctuary are also under way. “We’re building two sacristies on the side, the altar server’s sacristy and the priest’s sacristy,” says Fr. Markey. “We have an ambulatory back there, and we’re putting in a back door.” A free-standing altar, matching the style of the high altar, will be situated at the center of the sanctuary. Once both altars are in place, the College plans to offer a Dedication Mass.

“The architects have done a wonderful job making our additions to the Chapel, such as the confessionals and the altar rail, look as though they’ve always been there,” says Dr. Kaiser. “They look like they’re part of the original design. They fit in so well, and the craftsmanship is wonderful.”

The renovations will continue to enhance the prayer of students for years to come. “The Chapel reflects the beauty proper to the truth we are learning in the classroom,” says Daniela Martens (’24). “I find myself noticing new details, every time I go inside, that orient my thoughts to God.”