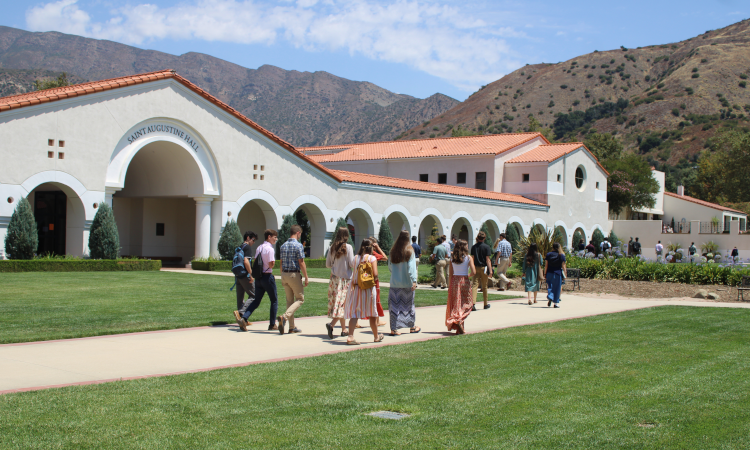 After a fulfilling weekend spent in play and appreciation of the arts, California High School Summer Program students rose this morning to a breakfast of cheddar-and-bacon scrambled eggs. In hushed tones over breakfast, they discussed their excitement — and, perhaps, anxiety — about today’s classes. In the morning session, they would be encountering Euclid’s Elements and approaching mathematics in a way that would be, for most, wholly different from what they had ever experienced before. And — also a likely a first — mathematics would be taught, like all classes at Thomas Aquinas College, via the Discussion Method, rather than through lectures.

Primarily focused on definitions, common notions, and postulates, students broke ground into Euclid’s foundational principles. Some expected this conversation to be over in an instant — they’re definitions, what’s there to talk about? The answer, the students soon realized, is plenty! One reported that his section used all 90 minutes of allotted class time and found itself wanting more! “That was my favorite class so far,” another student reported. “Our board was completely covered [in diagrams] by the end of class.”

Most students followed the first class with Mass in Our Lady of the Most Holy Trinity Chapel, then resumed their discussions of Euclid over lunch (steak fajitas). Notebooks were passed around, covered in diagrams, with students inquiring about the nature of one shape or another. Prefects soon came around the tables, reminding the spell-bound students that their next class was right before them. Many leapt up with even more excitement —Boethius’ Consolation of Philosophy. “It’s my favorite book of all time!” one student exclaimed.

A well-respected and successful 5th century Roman Christian, Boethius was falsely accused of conspiracy and sentenced to death. Understandably, as he awaited his sentence to befall him, he found himself confused and on the verge of despair. Rather than succumb, however, he put his mind to work and wrote his opus, the Consolation of Philosophy. In it, he and “Lady Philosophy” discuss evil, happiness, fortune, suffering, fate, and God — in short, many of the “big picture questions” the programmers have begun to consider over the last week. Students found their discussion of Boethius to be a highly engaging and worthy follow-up to the morning’s session on Euclid.

This afternoon, in addition to the regular recreation period, students have a Q&A with the Admissions Office. Come back tomorrow for updates and photos!