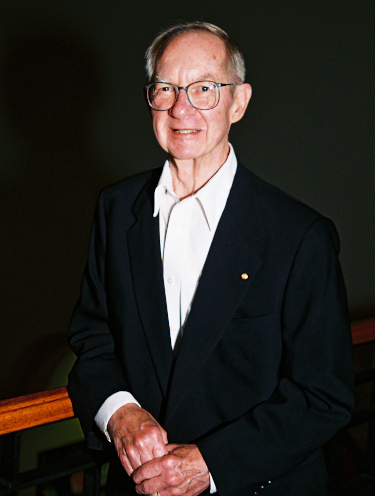 Edward N. Mills is a believer. He has not always been. Back in 1975, the idea of sending his children to a start-up Catholic liberal arts college in California was unsettling to the man who had founded what would become the nation’s 18th largest chemical distribution company. But four of his children are now Thomas Aquinas College graduates, and he is an enthusiastic member emeritus of the Board of Governors.

Mr. Mills was born and raised in the chemical business. His father worked at the Shell Oil refinery in Roxana, Ill., a company town that so dominated the 1,200 souls who lived in downstate Illinois that even the high school team was known as the “Shells.”

One summer between his sophomore and junior years of high school, Mr. Mills was working as a counselor at a local Boy Scout Camp. At the staff cookout and hayride to close the camp down for the summer, the Eagle Scout met a young Catholic girl from nearby Alton, Ill., Miss Dolores Springman.

Dolores was one of eight children from a devout Catholic family. Ed was an only child from a non-practicing Presbyterian family. The two began dating, rival high schools apart, over the next two years and through their graduations in 1948. With hopes of becoming a chemist, Ed went to the University of Illinois, Champaign-Urbana, to pursue studies in chemistry and mathematics. Dolores enrolled at St. Mary’s College at Notre Dame. The Catholic example of Dolores and her family left its mark on Ed. By Christmas break in his freshman year he entered the Church.

Dolores left college to teach kindergarten at her parish school back in Alton. In 1950, at the end of his sophomore year of college, Ed and Dolores were married. By his senior year of college, Ed had spent enough time in the laboratory to see that a career there was not for him. He took a job with Shell’s Chemical Division as a sales correspondent for the Chicago office. After a year, he trained at Shell’s technical service laboratory in New Jersey, where he acquired a practical knowledge about Shell products, organic chemicals, solvents, resins, and plastics. This was in the post-World War II heyday of chemical development, and Ed was at the heart of the technological boom with a major manufacturer of synthetic chemicals.

Mr. Mills resumed sales work in Chicago a year later. Then after transfers to Milwaukee and St. Louis, he decided to go into business for himself. It was a big risk, but Mrs. Mills, who was then expecting their eighth child, encouraged him to make the leap.

They returned to Wisconsin and the Mills started a chemical distribution business, Milwaukee Solvents and Chemicals, working out of their home. Mr. Mills’ niche was in fulfilling “rush orders” and in using his knowledge about the products to give him an edge over competition. Mrs. Mills would take calls from customers and handle all the orders and bookings. “I was changing clothes constantly,” he recalls. “I’d be in a business suit with a customer one minute, and then in jeans and work shoes the next, so I could package the products, jump in a truck, and deliver the orders.”

The couple’s partnership worked well. After six months, they hired their first employee. After two years, they moved to an outside office. In 1970, they opened a distribution facility in Minneapolis. Four years later, they opened one in Des Moines.

Meanwhile, as chairman of the board and CEO of Milsolv Companies, Mills had become an industry leader. He was President of the Wisconsin Paint and Coatings Association and Director of the Affiliated Chemical Group, an insurance association.

Mr. Mills built a plant to make fuel-grade ethyl alcohol. By 1998, his company (now known as Milsolv Companies) had grown to 160 employees and was doing $112 million in business with active business concerns in Wisconsin, Minnesota, and Iowa. Mrs. Mills was with him every step of the way. “She’s been the best business partner I’ve ever had.”

But this man of business and technical work had little interest in Catholic liberal education until he started seeing the effects it had on his children and met their friends. Over time, he became a fervent advocate of Thomas Aquinas College and in 1992 joined its board of governors. (He previously served as a director of the Wisconsin Federation of Independent Colleges.)

In 1998, the Mills sold their business and eventually retired to Oak View, Calif. Then, after 54 years of marriage and having raised 10 children, Mrs. Mills passed away in 2004. In honor of their decades of generosity to the College, Mr. and Mrs. Mills were inducted into the Order of St. Albert the Great in 2010.

Mr. Mills retired from the College’s Board of Governors in 2006, and by resolution of his erstwhile colleagues, he was granted emeritus status in honor of his many years of exemplary work.