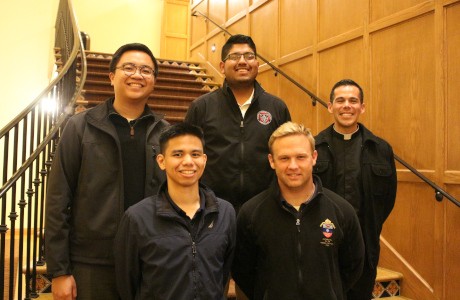 Representatives from the Archdiocese of Los Angeles who visited the California campus for a recent vocations talk, including Jorge Moncada Hernandez (’18 , center) and Paul Collins (’14, bottom right)

What does it mean to witness for Christ? How does one discern God’s call? What role does celibacy play in the life of a priest?

These questions and more were the topics of a recent vocations talk on the California campus presented by the Archdiocese of Los Angeles, featuring two alumni seminarians: Jorge Moncada Hernandez (’18) and Paul Collins (’14).

“This place was really foundational to discover my calling,” said Mr. Moncada, who urged students to see their time on campus as an opportunity to seek God’s will for their lives. Dating “a beautiful woman” while a student briefly caused him to question a lifelong sense that he was called to the priesthood, but during his junior year, “God told me what I needed to do in life.” Forsaking marriage and family is a difficult sacrifice, he added, but a joyful one. “We say ‘no’ to many things, but we say ‘yes’ to many more.”

Mr. Collins, who, in addition to a lifetime of service in the Archdiocese of Los Angeles, plans to spend 20 years as a chaplain for the Archdiocese for the Military Services, echoed this sentiment. “The priesthood is for a guy who wants to give his whole life to witness for Christ and save souls,” said Mr. Collins. “Being willing to give up marriage and family — despite really wanting it — that’s what makes a good priest. That’s the whole point of our spirituality: to give our lives for Christ.”

Mr. Moncada and Mr. Collins are just two of the five Thomas Aquinas College alumni studying for the priesthood in Los Angeles. The others are David Allen (’10), Michael Masteller (’13), and Edward Seeley (’16).