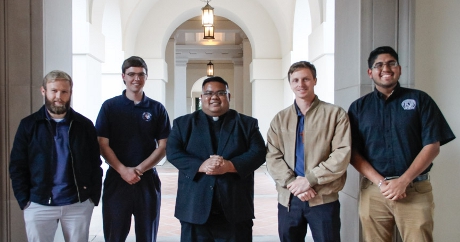 Rev. Mike Perucho, associate vocations director for the Archdiocese of Los Angeles, with the four Thomas Aquinas College alumni who are studying for the priesthood for the Archdiocese: Paul Collins (’14), Edward Seeley (’16), Michael Masteller (’13), and Jorge Moncada Hernandez (’18)

On Wednesday four alumni who are studying for the priesthood for the Archdiocese of Los Angeles returned to their alma mater to give a vocations talk to the College’s students. The late-afternoon session began and ended with some comments from Rev. Mike Perucho, the Archdiocese’ associate vocations director, in between which students heard personal talks from each of the alumni seminarians.

First among them was Jorge Moncada Hernandez (’18), a member of last year’s graduating class, who spoke of how he discerned his vocation, how his time at the College aided him in that process, and how he now longs to serve the people of Los Angeles as a priest. “This place definitely helped me in my vocation. It gave the foundation that we need to be good priests and also good men,” said Mr. Moncada. “And what we need right now in the Church are priests who are men really willing to understand their manhood and bring that to the people of God, and this place definitely helped me a lot in growing that.”

Next came Edward Seeley (’16), who described the spiritual and intellectual formation that the seminarians receive at the Archdiocesan seminary. “It’s a graduate-level program — so that’s a little easier than here,” he joked. “I find it’s very, very helpful to have had the formation here, because you’re able to see the unified picture more easily. You’re able to say, ‘Well, I can draw on St. Thomas or St. Augustine, and then look at what the more modern teachings of the Church are and how that fits in with them, how they integrate and connect.”

The next speaker, Paul Collins (’14) discussed his more particular vocation: Although studying for the priesthood for the Archdiocese of Los Angeles, where he will begin and end his ministry, he will serve for as many as 20 years between those periods as a chaplain for the Archdiocese for the Military Services, USA. “I felt a call to be a Navy chaplain because they have a real need right now,” said Mr. Collins. “There are less than 50 priests serving the entire Navy — that’s the least-served diocese in the whole world” — a deficiency he is working hard to ameliorate.

Finally Michael Masteller (’13) spoke about his experience as a seminarian, including learning Spanish and coming to know the wide range of cultures within the Archdiocese. He also described his discernment, how he deepened his prayer life while at the College, and how he became assured of God’s call while teaching high school in Wisconsin for two years after his graduation. “Working at a diocesan high school, seeing where our culture is at, the difficulties that a lot of youth are going through — that just really touched my heart,” he said. “Because there were a lot of good kids there, bright, and you could just see that they wanted more. I definitely felt called to be on the front lines with the people, wherever they are.”

The seminarians stayed on campus through dinner, where they met with students and visited with Chaplain Rev. Cornelius M. Buckley, S.J., whom Mr. Moncada later thanked on Facebook: