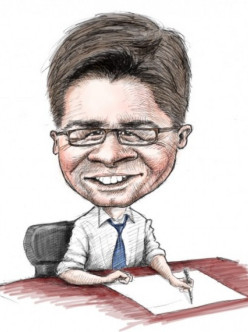 This blog recently featured an illustrated tribute to martyred French priest Rev. Jacques Hamel, penned by alumnus cartoonist Patrick Cross (’14). The work is one of several cartoons that Mr. Cross — who is, by day, a counselor in the College’s Admissions office — has drawn in recent months as he launches a career in editorial cartooning. Already, his efforts have borne some success: Mr. Cross produces cartoons weekly for CatholicVote.org, as well as occasionally for GlennBeck.com.

The idea began to take root during his Senior Year, when College Governor Berni Neal spoke at an on-campus career panel. Upon learning about Mr. Cross’ professional interests, Mrs. Neal revealed that she was friends with Michael Ramirez — the two-time Pulitzer Prize-winning cartoonist, formerly of the Los Angeles Times — and offered to arrange a meeting. “Ramirez was my favorite cartoonist growing up,” recalls Mr. Cross. “I went down to see him at the end of my Senior Year. We talked for about an hour and a half. That really put a fire in my belly.”

Mr. Cross began publishing his cartoons on his website and a Facebook page in January, and soon his work began generating attention. His goal, he says, is to produce cartoons that succeed on a variety of levels. “There are many layers,” he says. “You can have something that is funny in a slapstick sort of way. But some readers are looking for more.” Here, he adds, one sees the value and versatility of a classical education. “If you have an education that shows you how to identify principles, causes, effects, and prior causes, then you can do much better work.”

Patriotism infuses Mr. Cross’ art — a patriotism, he says, that has been with him all his life, but which deepened during his time at the College. “I’ve always loved the American founding. I’ve always believed in the principles of the country. But what my education at TAC really did, especially Junior Year, is show me why I believed in those things. In reading the Federalist Papers, the founders, and Abraham Lincoln — all in the context Aristotle’s Ethics and Politics, which we were studying in philosophy — I was able to locate the American experiment, or the American founding, in the context of the Western tradition. I came to a better understanding of why self-governance is good, why a government that promotes political prudence is such a gift, and also how we must not take any of it for granted.”

Patrick Cross Cartoons 2016
News
California
Senior Reflections: A Process of Discovery
California
Meet the Summer Program Prefects: Meg Murphy (’22)
All College
Faculty From Both Coasts Gather for Discussion and Fellowship
New England
An Interview with the Most Rev. Edward Scharfenberger, D.D.
All News