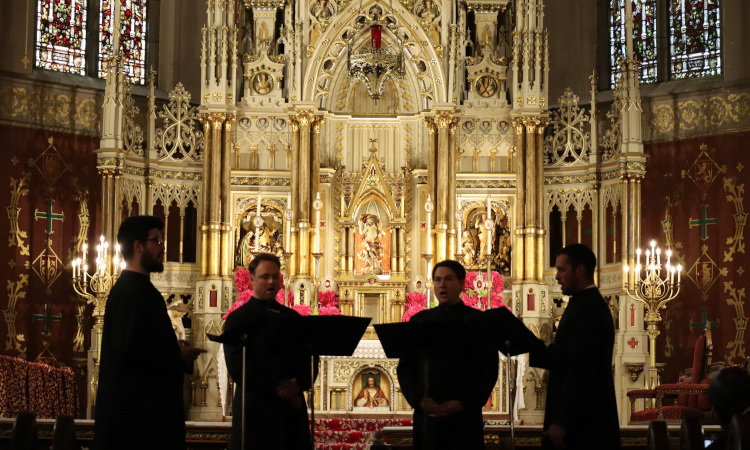 What began as a small student choir at Thomas Aquinas College in late 2017 has become Floriani, a highly sought-after men’s vocal ensemble — dedicated to preserving the Church’s heritage of sacred music — which performs both nationwide and overseas.

Thomas Quackenbush (’14), Giorgio Navarini (’17), Joseph Daly (’19), and Graham Crawley (’20) were not in the same class at the College, and their backgrounds vary widely, but as students they shared a common love of music. Fortunately for them, opportunities for musical enrichment abound at the College, in multiple musical ensembles.

“Those ensembles provided the first serious experience with sacred music for some of us,” recalls Mr. Daly. “The beauty was captivating, but it wasn’t just beauty. It was experiencing this beauty in its proper context: worship. At the College’s liturgies, the awesome music, the soaring architecture, and the reverence of celebrant and congregation alike pointed to the reality of the Eucharistic sacrifice.”

This musical grandeur charged these men with a sense of mission. “TAC was offering us something profound, and we felt sharing it was an imperative,” says Mr. Daly. And so Floriani was born — first as a student ensemble, adding another layer of finesse to the College’s liturgical life, but soon venturing further afield with its mission. “As students, we started singing off-campus for liturgies and workshops, as far south as Orange County and as far north as Montana. In the summer of 2018, we even made a 10-day pilgrimage to Rome, where we sang for Cardinal Burke’s Pontifical High Mass on Pentecost and for Sunday Mass at St. Peter’s Basilica!”

Floriani’s marriage of musical talent with liturgical reverence resonated with audiences everywhere. “The music had a visible and profound effect on people: It helped them enter the Eucharistic mystery more deeply, and they always asked us to come back,” recalls Mr. Daly. “Having little money — and a lot of homework — we rarely could come back, but we saw everywhere a burning desire to reconnect with the Church’s musical tradition.”

Though that same desire already burned in the men of Floriani as students, it waxed palpably after they graduated. “We had wistfully talked about pursuing the mission professionally, but had to set that dream aside largely unexplored,” remarks Mr. Daly. But with each day spent living and working in a culture largely deaf to the transcendent, the men of Floriani soon found themselves lingering over that unrealized dream. “At last Thomas, Giorgio, Graham, and I reconnected at the beginning of 2021,” says Mr. Daly. “We all felt called to revisit the mission — and the rest is history.”

In addition to their liturgical and other performances, Floriani provides instruction in Gregorian chant through its Chant School podcast. Its members are sustained in their many enterprises and busy schedule by a fundamental confidence in the importance of their mission. “Sacrosanctum Concilium, the Second Vatican Council’s Constitution on the Sacred Liturgy, calls the deposit of sacred music ‘a treasure of inestimable value, greater even than any other art,’” says Mr. Daly.

Thanks to Floriani, a new generation of Catholics is availing itself of that priceless treasure. Deo gratias!