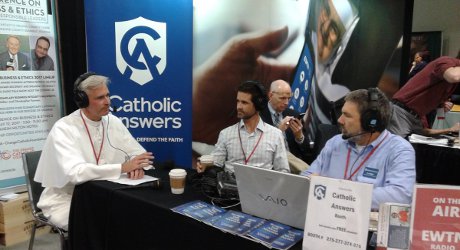 “You’ve been in Massachusetts because you’re a graduate of Thomas Aquinas College,” began host Cy Kellett on a recent episode of Catholic Answers Live.

“That’s right,” replied Rev. Sebastian Walshe, O.Praem. (’94), a professor of philosophy at St. Michael’s Abbey in Silverado California. A regular guest on the apologetics radio program, Fr. Sebastian appeared on the November 5 episode to discuss religious freedom. But before getting to the topic of the day, Mr. Kellett wanted to know about the Norbertine priest’s alma mater. Among “all of us out here on the West Coast,” he said, “there’s a general amazement at the quality of students that are being turned out by Thomas Aquinas College.”

And so Fr. Sebastian described his recent trip to the Bay State, where he spoke on the College’s New England campus at a celebration of its recent approval from the Massachusetts Board of Higher Education. “Thanks be to God, the College received the gift of a campus — with a number of buildings and so forth on a 100-acre property,” he said. “I was there to give a Mass and a little talk … and it was a very good, wonderful event.”

To which Mr. Kellett replied, “Congratulations to your alma mater embarking on this new endeavor. We can all pray that it’s successful!”

The entire interview — including Fr. Sebastian’s commentary about religious freedom — is available via the Catholic Answers website.