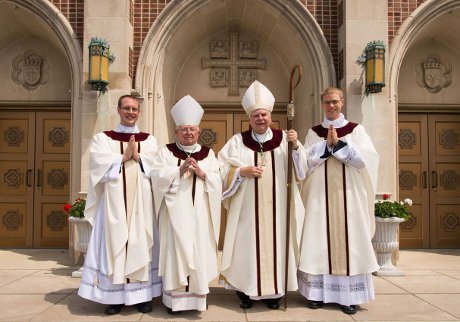 “What is God calling you to do? What does God want you to do and to be?” Rev. Jeffrey Hanley (’13) — then a 17-year-old high school student from southern Michigan — was attending a Catholic youth conference in Ohio when he first heard these questions. They unsettled him. “Until then, I had always thought about what I wanted to do in life in terms of my own fulfillment,” he recalls. “But hearing the question turned around like that — what does God want me to do? — gave me an inkling that I was being called to the priesthood.”

As it happens, there was another 17-year-old high school student from southern Michigan at that conference, Rev. Maximilian Nightingale (’13). He, too, was just starting to think seriously about his vocation. The two young men, who lived in adjacent parishes and attended rival public high schools, had never met before, but soon discovered that they had much in common.

In addition to their deep faith and their budding vocations, they shared an interest in the great books. A year earlier, Fr. Nightingale had taken up Plato’s Republic and Dostoyevsky’s Crime and Punishment; Fr. Hanley, meanwhile, had been reading Boethius’ Consolation of Philosophy. Both also expressed an interest in attending Thomas Aquinas College, and although they would only bump into each other on rare occasions over the next two years, they each decided to enroll as freshmen in 2009.

“I fit in right away,” remembers Fr. Nightingale of his first days on campus. “I loved the reading. I loved the discussions. The spiritual life was even more than I had expected. Before I came to the College, I thought I might go to weekday Mass once in a while. But then, when I got there and I found that lots of people were going every day, I began to do the same.” For both students, the experience made all the more clear the call that they had begun to hear in high school. “My time at the College helped foster that vocation, helped me to grow stronger in my faith, in my understanding of the Faith, as well as in my spiritual life,” observes Fr. Hanley. “It helped me to become more attuned to the word of God, both in word and in sacrament.”

As their awareness of their vocations grew, so did their friendship. By senior year, when they roomed together in St. Bernard Hall, both had submitted applications to become seminarians in their home diocese of Kalamazoo, Michigan. Shortly after graduating from the College in 2013, they entered Sacred Heart Major Seminary in Detroit. One year later, they departed for Rome, where they spent three years at the Pontifical North American College. And on June 24, 2017, the Most Rev. Paul J. Bradley, Bishop of Kalamazoo, ordained Fr. Hanley and Fr. Nightingale at the city’s St. Augustine Cathedral.

“During the Litany of Saints, when you are on the ground, giving your whole life right there, and everyone is praying for you — that’s when you feel the weight of what you are doing,” says Fr. Nightingale. “Then, right afterward, at the reception, you are giving first blessings to everyone who is coming up. It is amazing to see, as people tell you what they would like you to pray for, the great hope that is inspired by just the sight of a newly ordained priest.”

Witnessing an ordination is a reminder that “the Lord is faithful to His promises,” explains Fr. Hanley. “The Lord promised that we would not be left without a shepherd to guide His people. I know in talking with a lot of parishioners, a lot of friends, a lot of family members, they see Fr. Nightingale and my ordinations as one of those ways in which the Lord fulfills that promise.”

The young priests are currently serving at parishes in Kalamazoo, where they will remain for the rest of the summer. Fr. Nightingale is a parochial vicar at the cathedral, and Fr. Hanley at St. Joseph Catholic Church. In the fall, however, both will return to the North American College in Rome, where, over the next two years, they will complete their licentiate work in order to become canon lawyers. There they will be joining a fellow alumnus, Rev. Nicholas Callaghan (’96), who is studying canon law for the Diocese of New York.

“Most of our canon lawyers are approaching retirement age,” says Fr. Nightingale, and so Bishop Bradley, recognizing the impending needs of his diocese as well as the aptitudes of his two newest priests, chose them to undergo legal training. “Everything we studied at Thomas Aquinas College was a preparation for this,” Fr. Nightingale continues. “I think, especially, of St. Thomas’ treatise on law, which we read in our Junior Theology class. That background helps us to approach ecclesial law, for sure.”

For Fr. Hanley, taking this next step is a continuation of the journey that began when, as a teenager, he first consciously decided to live his life according to God’s will rather than his own. Becoming a canon lawyer is the way Our Lord has chosen for these two longtime friends, says Fr. Nightingale, “to do service for the Church — and for the people of God.”