A group of seminarians, including Michael Masteller (’13), middle row-left, with the Most Rev. José H. Gomez, Archbishop of Los Angeles

There are 62 priests among the Thomas Aquinas College alumni, but none yet in the College’s own Archdiocese of Los Angeles. By God’s grace, that will soon change.

On August 8, Michael Masteller (’13) entered the Archdiocese’s St. John’s Seminary in Camarillo. “From the seminary, I can still see Topatopa,” he says of the mountain range that rises above the College’s campus. “I love Thomas Aquinas College. I love California. I love the Church. And all these things meet here.” 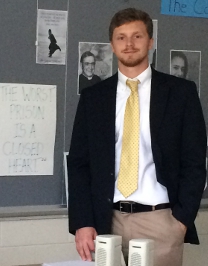 Michael Masteller (’13) during his teaching days in Kenosha, WisconsinIt was during his time at the College that Mr. Masteller first began to discern seriously his vocation. “Obviously the great access we have to the Sacraments, daily Mass, and confession, as well as always having the Chapel available for prayer, was very helpful,” he says. “The biggest thing for me, though, was that in Bl. Serra Hall we had a group of guys who took our studies and growing in faith very seriously. Two guys were doing holy hours every morning at 6 a.m. in the Guadalupe Chapel, and they invited me to join them. At first I thought I was too busy and turned them down, but then I went once, and it was really good. So I started going every day.”

This daily prayer routine would soon bear good fruit. “That holy hour made me feel God’s love for me and gave me incredible peace. When you feel the love of God in a profound way, it flows out into your friendships with other people and the work that you do. Everything in your life becomes better,” he says. “That experience of being closer to God, of committing to Him, it changed my life. It made me a better person.”

Upon graduating, Mr. Masteller spent two years teaching at a Catholic high school in Wisconsin, during which time he decided to pursue a diocesan vocation. “I was working with these great kids who had lots of potential, but who never really had strong leaders in the Faith,” he recalls. “That experience of really teaching my students, growing with them, walking with them — seeing so many souls at a normal parish who need good guidance — that steered me away from a more contemplative religious community and toward diocesan work. I want to be on the front lines and help the lost sheep come back into the fold.”

He considered entering the seminary for the Archdiocese of Milwaukee, but Providence ultimately led him back to Southern California instead. “There were a lot of good priests out there, and I met with Milwaukee’s vocations director,” Mr. Masteller says. “But when he handed me the application to their seminary, I just knew it wasn’t where I was supposed to be. With a little more prayer, I knew I wanted to come back and minister to the ‘home parish,’ where I grew up and spent most of my life. I want to give the rest of my life to God in the service of this archdiocese.”

Another influence in his return to Los Angeles was the work of his bishop, the Most Rev. José H. Gomez. “A few years ago a friend gave me a copy of the Archbishop’s book Men of Great Heart,” he recalls. “Then Fr. Buckley randomly walked up to me and gave me the same book. ‘OK,’ I thought, ‘people want me to become a priest.’ I put it in on the shelf and never really read it. But later, when I was in Wisconsin, I began to read it, and it gave me courage by showing me the example of other brave men and women who have gone before me and given their lives to Christ. That really helped me to finish my discernment and to enter the seminary. It also gave me a lot of confidence in our bishop, to see how he is both deeply intellectual and passionate about the Faith.”

By virtue of his studies at the College, Mr. Masteller has been exempted from first-year pre-theology classes and now enters the seminary as a second-year student. God willing, his ordination as the first alumnus priest in the archdiocese is just six years away.