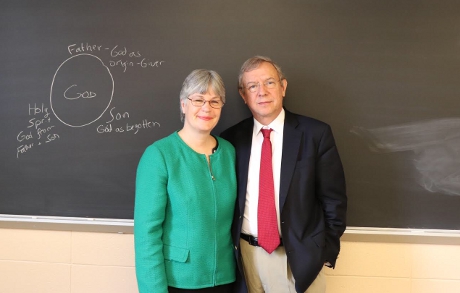 The Troubadour, the student newspaper of the Franciscan University of Steubenville, recently featured an endearing profile of two of the university’s newest theology professors, both graduates of Thomas Aquinas College: Drs. Susan (Burnham ’78) and Michael Waldstein (’77).

The story chronicles how the Waldsteins met on Susan’s first day at the College, which, she admits, she had been reluctant to attend, thinking she would prefer to pursue a degree in chemistry or biology. Yet once she began the College’s program of classical liberal education, her perspective changed. “I learned a different way of looking at nature by studying the natural philosophy of Aristotle,” she says. “I realized that looking at nature in that way contributed to theology and that there could be a theology of biology.”

The couple married just three days after her graduation. From there, says Susan, “We went around, and he got degrees and I had babies.”

Michael earned a master’s in philosophy from the University of Dallas, a licentiate in Scripture from the Pontificium Institutum Biblicum in Rome, and a doctorate in New Testament studies from Harvard Divinity School. Following eight years as a theology professor at the University of Notre Dame, he then declined an offer of tenure to become the founding president of the International Theological Institute (ITI) in Gaming, Austria. In 2008 he joined the theology faculty at Ave Maria University, and one year ago he came to Franciscan to launch a doctoral program in theology.

While homeschooling eight children — four of whom are now fellow Thomas Aquinas College alumni, and two of whom are current students — Susan went on to earn a master’s and a licentiate degree in theology at ITI. She wrote and defended her doctoral dissertation for the University of Fribourg, Switzerland, while homeschooling the couple’s youngest three children in Florida. She, too, now teaches theology at Franciscan. In addition, the couple serves on the Pontifical Council for the Family, appointed as members by Pope St. John Paul II.

Through it all, they have maintained a beautiful witness, in both their personal and professional lives, to the goodness of marriage and family. “Their prime classroom was their home,” writes Troubadour editor-in-chief Allegra Thatcher, “where they raised a happy family in extraordinarily simple ways.”