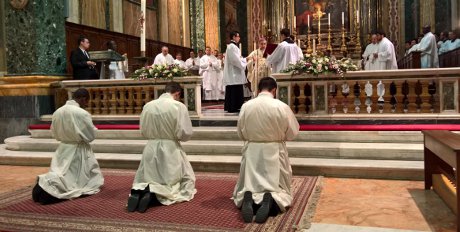 In April, this blog reported that Deneys Williamson (’10) had requested prayers for his upcoming ordination to the transitional diaconate. Now, in a new letter to the College, he writes, “Thanks for all your prayers!”

By God’s grace, the Rev. Mr. Williamson’s ordination took place, as planned, on May 1, the Feast of St. Joseph the Worker, at the Basilica of Saint Apollinaire in Rome. “The ordination went off well, and everyone had a truly lovely day,” writes Rev. Mr. Williamson, a seminarian for the Archdiocese of Johannesburg, South Africa, who has studied at Rome’s Sedes Sapientiae seminary since 2011.

The photo below shows the newly ordained deacon with several Thomas Aquinas College alumni who were on hand for the occasion: 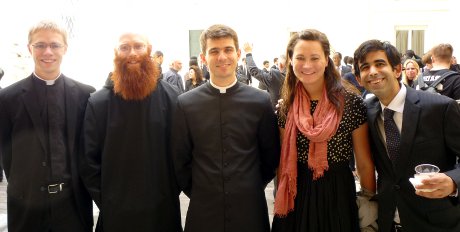 Above: Jeff Hanley (’13), a seminarian for the Diocese of Kalamazo, Michigan; Br. Augustine, O.S.B. (Philip Wilmeth ’13), a novice at the Monastero di San Benedetto in Norcia, Italy; Deacon Williamson; Maggie Tuttle (’10), who works as a lead for talent solutions support services at LinkedIn; and Tom Sundaram (’09), who is currently studying in Rome