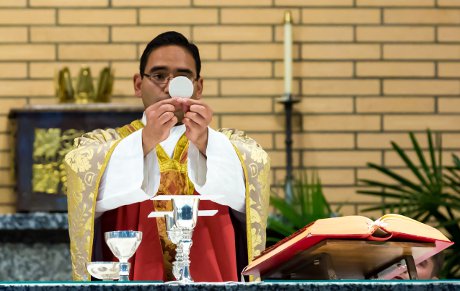 Rev. Miguel (Gaspar ’08) Batres, O.Praem., was not surprised when, as a transitional deacon studying at Rome’s Pontifical University of Saint Thomas Aquinas, he was asked to serve at Vespers for His Holiness Pope Francis. After all, several of Fr. Miguel’s Norbertine confreres had done so in recent years, in no small part because they are experienced with Gregorian chant and can speak Latin. He was, however, caught off guard when, on the eve of the Solemnity of Mary, Mother of God, the Pope approached him and started a conversation.

“I was not expecting to talk to him!” he recalls. “So when he came to me, I didn’t know what I wanted to say. I just said, ‘Can I give you a hug?’ I then hugged him and told him, ‘Thank you for the responsibility you take, and be assured of my prayers.” In meeting the Holy Father, says Fr. Miguel, “It struck me — this is the Vicar of Christ. This is the successor of St. Peter, and this is not just an everyday opportunity. It was an amazing privilege.”

Twice more in the ensuing months Fr. Miguel would get to serve with Pope Francis — including on Good Friday, when he chanted the words of Christ during the papal Celebration of the Passion of our Lord at St. Peter’s Basilica. That sense of gratitude he had experienced in Rome filled him yet again on June 24, when the Most Rev. Timothy Freyer, Auxiliary Bishop of Orange, California, ordained him a priest at Mission San Juan Capistrano.

A canon at St. Michael’s Abbey in Silverado, California, Fr. Miguel — the second youngest of 11 children of Mexican immigrants — had long imagined this day. “It’s something I received as a child,” he says of his vocation. “I don’t remember ever wanting to be anything else.” During his sophomore year in high school, his parish priest took him for a visit to Thomas Aquinas College. “I saw the goodness of the school,” he says. “And I knew that it would be good for my future as a priest.” At the College, another priestly mentor, Rev. Charles Willingham, O.Praem., brought him and some friends to St. Michael’s Abbey for the Easter Triduum, a visit that ultimately led to his entering the Norbertine Order.

Since his ordination, Fr. Miguel has taken on the role of his community’s provisor, charged with providing for its material needs. He also offers Masses in Spanish at nearby parishes. In the fall he will teach freshman religion at the abbey’s prep school. “It has been very beautiful to offer the Mass and serve as a priest,” he says. “It is a true blessing, almost at times unbelievable, and I am very grateful for it. Thanks be to God!”