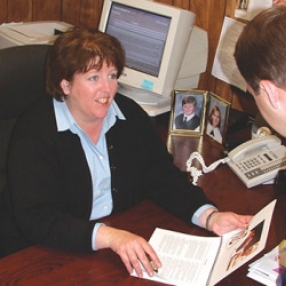 Anne Forsyth is an alumna of Thomas Aquinas College’s Class of 1981. Following her graduation, she studied English literature at the University of Dallas’ Braniff Graduate School and then worked in administration for two international management consulting firms. In 1985, she married and spent 10 years living abroad with her husband, a diplomat in the U.S. Foreign Service. After his death in 1999, the then-president of Thomas Aquinas College, Dr. Thomas E. Dillon, asked her to return to her alma mater to serve as his assistant. In 2004, she was appointed to the school’s administrative faculty as Director of College Relations, and in 2020 she became its Director of Special Projects.

Mrs. Forsyth lives in Santa Paula, California, and her two children are alumni of Thomas Aquinas College. She was invested as a dame in the Order of Malta in 2011 and serves as chair of the Order’s Nurturing the Faith committee which provides catechesis and spiritual formation to the 800 knights and dames of the Western Association.