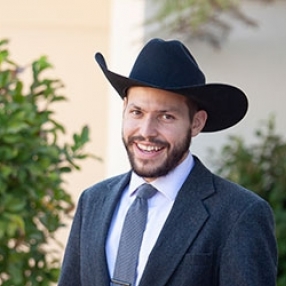 “The whole pioneer experience is something that I am very much familiar with,” says tutor Dr. Benjamin Block, referencing the students who are the first to study on Thomas Aquinas College’s new campus in Northfield, Massachusetts. When he was a college freshman, he, too, was a pioneer — one of the 33 initial students at Wyoming Catholic College. “It was wonderful to be a part of that,” he recalls. “We had a real sense that the input we gave was helping to make the school what it would become.”

To familiarize himself with Thomas Aquinas College’s culture and customs, Dr. Block is beginning his tenure in California, but in a year or two, as the New England campus expands, he will head eastward. “In these first years, the student body in Massachusetts will be especially small and tight-knit,” he says. “Students will get to have personal relationships with every single one of their tutors, which is a great opportunity.”

It was his time as a student on a small, tight-knit campus that led him to seek a career in education. “I had this conversation with my professors where I would say, ‘Look, I want to keep doing this. I want to keep learning. How do you do this?’” Dr. Block remembers. “The answer was always, ‘If you want to keep learning, then the best way is to teach.’ And that was the first time that I ever realized, ‘Oh. Maybe that’s what I should be doing, then — trying to teach.’”

Upon his graduation from Wyoming Catholic, he enrolled at The Catholic University of America, where he earned a licentiate and a doctorate in philosophy. During that time he also taught in the University’s Philosophy Department as well as at Christendom College’s Graduate School of Theology.

Dr. Block’s love of learning now brings him to the teaching faculty of Thomas Aquinas College. “Some scholars are much more interested in the research aspect of academia, but for me it was never about that,” he reflects. “It was always about wanting to keep learning, working with students in the classroom. That the College encourages tutors to concentrate on their teaching — and not just in our areas of expertise, but across the curriculum — really attracted me.”

Already he is getting to experience the joys and challenges of teaching multiple disciplines, leading freshmen in Seminar, Natural Science, and Philosophy. Much to his delight, he is still learning, but he has come to see that the love of learning alone is insufficient to make one a good teacher.

“Josef Pieper has this great line where he’s talking about St. Thomas, and he says, ‘Love of the truth and love of men: Only the two together constitute a teacher,’” quotes Dr. Block. “That’s something I have tried to make a part of my own philosophy of teaching: That it’s not enough just to know and love the truth. To be a teacher you have to love the truth and love the people to whom you’re bringing it. The students are what matter.”