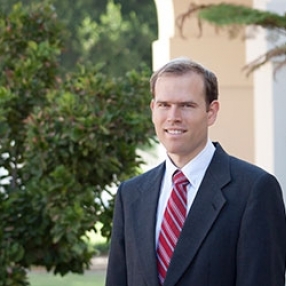 Before Blaise Blain arrived at Thomas Aquinas College as a freshman in 2006, he imagined that he would follow in his parents’ footsteps and become an engineer. That plan changed, however, as the College’s integrated curriculum revealed to him some hitherto undiscovered passions.

“I was always interested in math and science, so those classes were right up my alley,” Mr. Blain recalls. “But what I didn’t know was how reading philosophy and theology can have its own intellectual rigor. Put another way: When you read Aristotle, you realize how good it is, and then you want to keep doing it.”

After graduating in 2010, he departed for The Catholic University of America to pursue a master’s degree and doctorate in philosophy. Two summers later, he was joined there by his new bride, Therese (Fox ’12). The couple now has two children, the younger of whom, Agnes, was born at 2:00 a.m., Eastern Time, on January 29 — which, her father likes to point out, was still the Feast of St. Thomas Aquinas (January 28) back in California.

Having studied and taught only philosophy for six years, Mr. Blain is now delighted to reacquaint himself with his earlier intellectual passions — math and natural science — in his multidisciplinary teaching duties as a Thomas Aquinas College tutor. “What’s really fun is that, here, you can teach both math and science in a philosophical way,” he says. “You get to step back and ask philosophical questions, to think about both in a more profound way.”