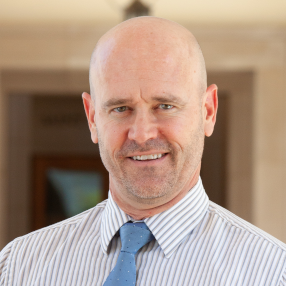 With both a B.S. and an M.S. in civil engineering already in hand, Brian Dragoo found himself in 1997 intrigued by Thomas Aquinas College and applying for entrance to its Bachelor of Arts program. Now, having completed the College’s program in 2001, he is a member of the teaching faculty at the College, bringing to his new position a wealth of experience in both engineering and information technology

As a young boy, Dragoo delighted in the logic he found in mathematics and science. Years later, he went on to pursue studies in engineering at the University of Arizona. Mathematics and technology came easily to him because, as he explains, “They were logical; they just made sense.” Not surprisingly, he went straight through the engineering program in five and a half years, completing an M.S. at the age of 23.

During those years of study, Dragoo had a natural aversion to studies that were not presented in a logical way. Looking back, he says that he saw the liberal arts as “flaky and untrustworthy because they did not conform to the truth that was laid out so clearly in the sciences. From the little I saw of the humanities departments in college, the sciences and liberal arts seemed at odds with each other in a fundamental way.”

Mr. Dragoo was raised as a Catholic. Without explicitly rejecting his faith, he nevertheless drifted to an evangelical church during his years at the University of Arizona. As he recalls, “Its members seemed alive with their faith.” But he was not satisfied. “They are good at getting you in the door, but once I was in the door, I saw that all the excitement was in getting there.” This mathematician wanted something that would endure.

At the urging of a close friend, Mr. Dragoo attended the Stations of the Cross at a Catholic church on Good Friday in 1993. There he experienced for the first time the depth of the Catholic faith in which he had been raised.

Through his friend, he met more Catholics who introduced him to the intellectual life of the Church. He began to read Catholic authors such as G. K. Chesterton, and what he learned propelled him to explore Catholicism more deeply.

Mr. Dragoo began to realize that there was an intellectual component to the Catholic faith, and that there were Catholics who were steeped in its literature and philosophy. To gain a better understanding of the Faith, he realized that he, too, needed to immerse himself in these works. So, during graduate school, Mr. Dragoo audited classes in philosophy and classics, and he read poetry. He also began to attend Mass again.

About this time, he met fellow student, Amy Campbell, a Southern Baptist who nevertheless was willing to go to Mass with him. So affected was she by the Mass that it was Amy who first asked, “So, Brian, why aren’t we Catholic?”

Not long after, they entered an RCIA Program together — Brian to “revert” and Amy to convert. Before completing the program, they were married in the Catholic Church by special permission in 1996; Amy received her First Holy Communion at their wedding, and they were both confirmed at the end of the RCIA program the following Easter.

Just after their marriage, Brian came across an article about Thomas Aquinas College that described both the Catholic nature of its program of liberal education and the vibrant nature of the spiritual life on campus. Excited by the information, the Dragoos visited the campus during Commencement exercises a few months later. Finding the College to be even more appealing than they had dared to hope, Brian applied for admission to the College the very next day.

Looking back, he says, “Now I can see why existentialism and other modern philosophies I came across in high school and in college made no sense to me. The professors were teaching in a vacuum, as it were, without a referent. But these modern philosophers were reacting to the Ancients, and they lose any intelligibility whatsoever when studied out of context. That’s why they made absolutely no sense to me.”

Mr. Dragoo realizes now that his earlier frustration with philosophy and the humanities was due not to a lack of interest in himself but to a defect in the teaching of these subjects. He accounts for his transformation from engineer to member of the teaching faculty at Thomas Aquinas College by pointing to what he now understands was an abiding love for the truth. He sees now that the material world which he sought to understand — and mastered to an extent in his studies of engineering — bears the stamp of the Creator and argues for the existence of God (as St. Thomas Aquinas made famous) from its own inherent order.

While Mr. Dragoo attended classes at the College, Amy worked in the College’s Development Office; Brian was one of the few students who, because he was married, lived off campus. As newlyweds, they were hoping for children. But as time passed, they began to ask for prayers from classmates, tutors — everyone. They even looked into adoption. But no child came their way.

After a long period of waiting and worrying, campus chaplain Rev. Bart de la Torre, O.P., emphatically told the young couple, “Stop worrying! God wants Brian to get through this program. As soon as he graduates, you’ll have babies,” Mr. Dragoo recalls. “He said it as though it were a fact.”

Amy and Brian went through Brian’s four years at the College without having children. Then just six days before his graduation, they received the long-awaited news that there was a baby for them to adopt. Lucienne Dragoo was born June 23, 2001, only 2 weeks after Brian delivered the Senior Address at his graduation from the College.

Because Lucie’s adoption was still pending, keeping the Dragoos in Ventura County, Brian took on the job of full-time network administrator for the College. As so often happens, God now answered their prayers more fully than this couple could have imagined: while learning how to take care of their newly adopted daughter, Amy was soon happily overwhelmed by her pregnancy — with twins. Just eight months after bringing Lucienne home, the Dragoos’ own biological twin girl babies were born. And over the next several years, the family would be blessed three times more — again with girls — bringing their total number of daughters to six.

“Back in Arizona, I never expected to be teaching at a Catholic college that offered a classical liberal education,” Mr. Dragoo reflects. “But I am absolutely delighted now.”