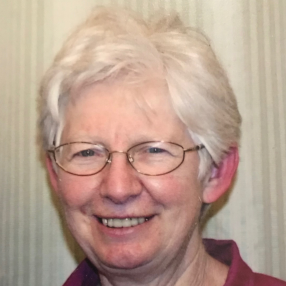 In 2002, National Forest officials needed someone to lead clean-up efforts of the Santa Paula Canyon behind the Thomas Aquinas College campus for the Annual California Coastal Cleanup. It was only natural for them to turn to College tutor Carol Day.

Dr. Day led a crew of more than 30 student and local volunteers for trash-picking and clean-up along the scenic trail following Santa Paula Creek deep into the Los Padres National Forest. It was a terrain she knew well.

Dr. Day has combed several hundred miles of hiking trails in her time, many of those in the 2 million acre national forest that borders the College’s campus. She hikes at least once a week, eight miles average, and has backpacked in Alaska’s Wrangell-St. Elias National Park, the Olympic National Park in Washington, and the High Sierra Mountain Range in California. She has climbed 14,500-foot Mt. Whitney, and she snowshoes in winter.

She found her love for hiking growing up near the Great Smokey Mountains in Greeneville, Tenn. With it came a love for science and nature. Dr. Day obtained her Bachelor of Science in astrophysics from the University of Indiana, a master’s degree in astronomy from the University of Michigan, and a doctorate in the history of science also at Indiana. She came to Thomas Aquinas College in 1981 and has been a mainstay tutor for the mathematics and laboratory courses.

In 1997, Dr. Day formed a volunteer service group — the Bushwhackers — comprised of students from the College and community residents that adopted an eight-mile section of a scenic trail that had fallen into disuse. That trail, known as the Last Chance Trail, rises to the top of the 6,300-foot Topatopa Bluff that dominates the College’s skyline. Since then, Dr. Day and other members of the group have put in over 1,000 hours of service, clearing overgrowth, repairing pathways, and marking the trail.

When not hiking — or teaching — Dr. Day can be found at night, often on area hilltops or clearings, sometimes out in the desert, helping students and others look at comets, meteor showers, eclipses, planets and deep sky objects. She is a member of the Ventura County Astronomical Society.