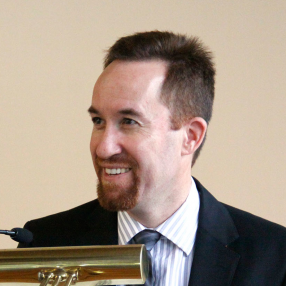 Dr. Christopher A. Decaen joined the faculty of Thomas Aquinas College in 1999, six years after graduating from the College in 1993. The return was full circle for the native of nearby Ventura, Calif., and one he never expected.

When he was still in high school, Chris planned to study painting and fine arts upon graduation. His father, however, had befriended former College chaplain Rev. Gerard Steckler, S.J., and urged Chris to give the College a try. With some reluctance, he did, planning to attend only for a year and then pursue fine arts elsewhere. But after his first month of studies, he thought, “Who cares about fine arts?” His mind had been awakened to another beauty.

By his senior year, Chris held a stellar grade-point average and was the only member of his class to pass “with distinction” due to the high marks he received on his senior thesis. He also obtained near-perfect marks on his Graduate Record Examination and decided to pursue graduate studies in philosophy.

After spending a year paying down student loans, he obtained a full scholarship in the philosophy program at The Catholic University of America in Washington, D.C., and so enrolled. Two years later, he obtained his master’s in philosophy, magna cum laude, and was honored to participate in the Society of Aristotelian Studies Summer Program. (He now serves as the Society’s West Coast Representative.) He then spent the next two years teaching undergraduate courses at Catholic University, “Introduction to Modern Philosophy,” “Introduction to Classical Philosophy,” and “Epistemology.” In addition, he taught “General Introduction to Philosophy” and “Logic” at Christendom College in Front Royal, Virginia.

In December, 1998, Chris defended his dissertation thesis, “Aristotle on the Existence of Ether and The Refutation of Void — A Critical Evaluation of the Arguments” — which he passed with distinction. In the spring of 1999, he was awarded his doctorate in philosophy. That summer he also got married. His wife, Rose, is a Vancouver, Washington, native and a 1996 graduate of Christendom College. Today the couple and their four children live in Santa Paula.

“I never thought I would be back here so soon,” he said at the time. “I have really come to appreciate the seminar method, rather than the lecture format. Students teach me as much as I teach them. And it’s such a pleasure to have students who are serious about learning and who recognize that it is worth doing for its own sake. That level of interest is not something you find at your average college or university.”