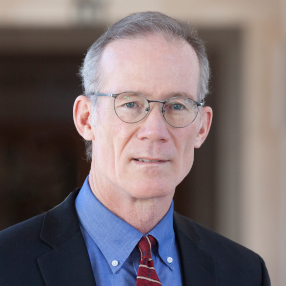 Profile
The story of how Dr. David Appleby came to Thomas Aquinas College is one of how the study of history can be a road to the great books and the Catholic faith.

An ancient historian on the faculty at the University of Utah who had done his graduate work at the University of Virginia encouraged Dr. Appleby to do the same. After earning his bachelor’s degree in European history in 1981, Dr. Appleby took his mentor’s advice and moved to Virginia. Before doing so, though, he took some time off to marry the daughter of a physics professor at the University of Utah, a fellow student whom he had first met in high school band class. He and his bride, Marilyn, went backpacking in the High Uintah Mountains for their honeymoon, and then climbed into a car and drove to Virginia.

At the University of Virginia, Dr. Appleby received his master’s degree and a doctorate in medieval history, focusing in his studies on the medieval Fathers of the Church.

Dr. Appleby’s study of medieval history would eventually occasion his conversion to Catholicism. He came to see a wisdom in the rich Catholic Faith of medieval society. “One of my undergraduate teachers, a medievalist at Utah, had planted in my mind the idea that there might be a radically different way to view the world than with the usual unquestioned assumptions about what’s real and what’s important, and so I took that on board in his medieval history class. I was always interested in what made these medieval people tick and what made their world work. I first wondered how they could be so foolish as to have a different view of things from us. But I came to find that, in fact, many of their assumptions and ideas made a lot more sense than the chaos that you find in modern thinking. They were unabashedly true to principles not of man’s invention, but which make better sense than what we could find on our own.”

Dr. Appleby’s conversion happened slowly, over 10 years. He had at first attempted a detached, neutral approach to medieval history, but he eventually saw that the worldview he was studying made better sense in accounting for his own experiences and beliefs than any other kind of philosophy. He finally decided it was imperative that he enter a catechism class. He entered the Church in 1996, and his wife followed a few years later.

“Finally, only by accepting God and conforming to the Church and Her teachings could we really justify a lot of the things that we know about ourselves, like the importance of the family. That needs the support of Christianity, and especially Catholicism with the structure of the sacraments. One wants to bring one’s life into harmony with those truths — and if it requires accepting behavior that one’s family and friends regard as foolish, so be it.”

During the time of his conversion, Dr. Appleby was teaching medieval history at the United States Naval Academy in Annapolis, Maryland, where he had served on the faculty since 1990. At first, Dr. Appleby thought this would be a temporary position, but he found that he fit in well at the Academy. He ended up obtaining tenure and staying for 11 years, teaching history and developing a course in the history of pre-Reformation Christian culture. During that time, he published a variety of articles in journals such as The American Benedictine Review, The Catholic Historical Review, Word & Image, and Mediaeval Studies.

While teaching at the Naval Academy, Dr. Appleby learned about the great books program at nearby St. John’s College. “St. John’s was right by the Academy, so we often took students to their Friday night lectures. The post-lecture question-and-answer period was always a gladiator pit; it was very fun, and there were some Naval Academy students who really thrived in that situation. They needed that sort of experience, that sort of free-flowing verbal exchange, rather than the staid engineering classes that were their mainstay at the Academy.

“I had various friends on the St. John’s faculty, and I always thought that would be a great place to teach. Really, it was in some ways more suited to my interests and talents than the narrow confines of a history department.”

At the same time that his interest in the great books had been piqued by the program at St. John’s, Dr. Appleby was beginning to feel less at home at the Naval Academy.

“I felt a mounting suspicion that some of the assumptions built into classical liberalism had already shaped the curriculum and institutional character and the whole way of doing things at places like the Naval Academy or the University of Virginia, like countless other schools. All of the experience that I had in higher education seemed to have been, in some way, compromised by these assumptions — that man is in a vacuum, that man is the creator of himself, that we should be most interested in and admirers of the technical and mechanical things that human beings can make, or alternately, that we should be interested in the products of human culture over the centuries. Everything should be reduced to these principles, though proponents of this view don’t view it as a reduction.”

It was then that one of his colleagues at the Naval Academy, who had grown up in Southern California, told him about a website for an interesting college that was in some ways like St. John’s — but this one was Catholic. “Looking at the Thomas Aquinas College website,” says Dr. Appleby, “I thought, ‘What do you have to do to teach at a place like that?’”

He had from time to time entertained the idea of teaching at St. John’s, but knowing its program to be non-historical, he feared that his major training in history might diminish his chances of an appointment there. Thomas Aquinas College shared this non-historical approach to the study of the great books and, further, emphasized the thought of St. Thomas Aquinas, not his main focus of study. “But there were some other things I thought I could offer the College. I’m a Catholic and my scholarly work, I think, is not in conflict with Christian spirituality; it actually harmonizes with it pretty well.”

So Dr. Appleby applied for a teaching position at the College, visited for a round of interviews, a lecture and a seminar, and was given the appointment, which he gladly accepted. Had he stayed at the Naval Academy, he would likely have been promoted to a full professorship within the next year, but he chose otherwise.

At Thomas Aquinas College, Dr. Appleby has found himself a wonderful new challenge. “With the great books, no one can ever say, ‘Well, I have that completely under control.’ The beauty of it is that even after you’ve been through one of the great books many times, there is still a lot of beauty, a lot of depth. And each time you go through it with a different group of students, you go down a different alleyway where you find new riches.”

Dr. Appleby is better versed in some areas of the curriculum at the College than others, but in most every area of the program he has done serious study. He is conversant with what is studied in the four-year program, either from his own scholarly work or from books that he has used in Western civilization courses — from the ancients to Machiavelli, from Shakespeare to Eliot.

David and Marilyn have been blessed with two children — a daughter, Zoe, and a son, Peter. Having already made a momentous move from the confines of a history department to the spaciousness of the great books and the Catholic Church, the Applebys made their move from Maryland to California with ease and are now settled in the town of Santa Paula, not far from the College.