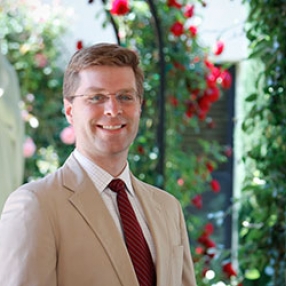 When he was in high school, David Grothoff had a good friend who decided to attend Thomas Aquinas College. It was an intriguing choice, David thought, but not for him.

Instead, David opted to study mechanical engineering at the University of Missouri. “Engineers were the ones who figured out how the world works,” he reflects. “I was interested in knowing how natural things operate.” To his surprise, engineering school could not sate his curiosity. “No one was interested in answering my questions,” he recalls. “For example, we used equations involving force all the time, but if you asked someone, ‘What is a force?’ that wasn’t seen as a reasonable question. The underlying assumptions didn’t matter.”

When his friend invited him to visit the College during his Junior Year, David accepted. Attracted by the faithful community, and surprised to learn that philosophy could answer the sort of questions that fascinated him, he decided to enroll after completing his engineering degree. “Some people worried that I would find the mathematics here to be repetitive or boring because of what I had already done, but that wasn’t the case,” he says. “Yes, I was already proficient in the mechanics of calculus, but this was a very different outlook, and very different questions were being asked, better questions.”

Upon graduating from the College in 2007, Mr. Grothoff elected to combine his background in engineering with his studies in philosophy and pursue advanced degrees in the philosophy of science. After a one-year break from schooling, during which he worked for a home-development corporation, he enrolled at The Catholic University of America. There he earned a licentiate in philosophy and completed the coursework for his doctorate. He also met his future wife, Crystal. The Grothoffs, now with three young children at home, live near the College’s California campus in Santa Paula.