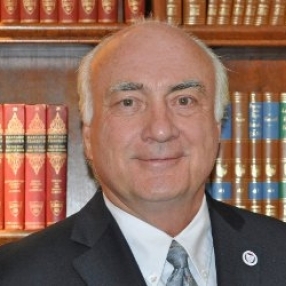 “Sometimes serendipitous meetings trigger momentous events,” says Dennis McCarthy. He would know: Three such meetings, over the course of more than four decades, led to his becoming the College’s vice president for finance.

The first such meeting occurred after his graduation from Georgetown University, and it took place in a laundry room at Harvard Business School, where he was in his second year. It was there, in a friendly conversation with a fellow student, that he first heard the words “investment banking.” That comment sparked an interest, which led to a 40-year career, including executive positions at firms such as EF Hutton, Drexel Burnham Lambert and, most recently, Boustead Securities, where he served as managing director.

The next meeting came about some 30 years later, when Mr. McCarthy’s wife, Kimberly, attended a prayer breakfast at Los Angeles’ Cathedral of Our Lady of the Angels. She was seated at the same table as Dr. Thomas E. Dillon, then the president of Thomas Aquinas College, who invited her and the oldest of the McCarthys’ three daughters, Kim (’11), then 17 years old, to visit the campus. Kim quickly “fell in love with the school,” her father remarks. She applied, enrolled, and — on her way to graduating in 2011— met her future husband.

The final meeting took place over the telephone some seven years later, in 2018. After 40 years in investment banking, Mr. McCarthy had been praying regularly about whether God was calling him to a new career. He then got a call from the College’s current president, Dr. Michael F. McLean, asking if he would consider succeeding the retiring Peter L. DeLuca. “I get it,” he remembers thinking. “I hear the message, and I am interested. It’s a school I love, and this is the opportunity for me to apply my talents in these next 40 years.”