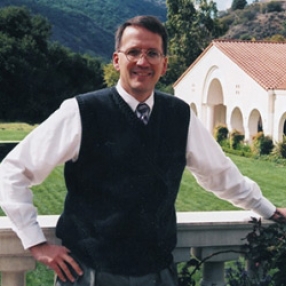 Many families find paying for college a challenge. Over the years, Thomas Aquinas College has made every effort to keep its charges as low as possible. Nonetheless, in order to attend, 73 percent of the students enrolled at the College receive financial assistance. Administering the various aid programs is a full-time job for Mr. Gregory Becher, Director of Financial Aid.

Mr. Becher, a graduate of the Class of 1980, came to the College after working for seven years in the banking industry at Sunwest Bank in Gallup, New Mexico, where he managed a sizeable commercial loan portfolio, assembled Small Business Administration loans, and worked with the Bureau of Indian Affairs loan program. Prior to that, he worked for the National Academy of Sciences in Washington, D.C., in its information systems department. In addition to a B.A. in liberal arts from Thomas Aquinas College, he also holds a B.S. in mathematics and physics education from the University of Wisconsin, Madison.

Mr. Becher has been working at the College since 1995. He assists students in putting together programs of grants, scholarships, loans, and work-study jobs in such a way as to make attending Thomas Aquinas College possible for many for whom it would otherwise be impossible.

“I look at each financial aid application that comes through my office individually,” says Mr. Becher, “doing my best to carry on the tradition of the College to help families with their demonstrated financial need. I genuinely believe that you won’t find another college that does more than Thomas Aquinas College to provide need-based financial assistance to families.”

“Our needs-analysis formula is based upon mutual responsibility,” explains Mr. Becher. “What I mean by that is that we expect our students and their parents to make a maximum effort to pay for the cost of college before asking for the help of benefactors; but at the same time, the College also makes a maximum effort to provide whatever is needed after the student and his family have done all that they can. Many other colleges ration aid from a fixed financial aid budget. At those colleges, when the funds are gone, they’re gone. Not here. We commit to whatever dollar amount is needed by our students even though that means our Development Office must spend the next nine months knocking on doors to raise the funds that we have committed to. That is mutual responsibility — both parties making a maximum effort.”

On the part of parents, the College asks them to be as generous as possible. “We are probably unique among colleges insofar as the first question on our financial aid application asks parents to propose what they are able to pay toward their child’s education,” says Mr. Becher. “We encourage parents to take that question seriously and, we hope, go beyond what they might expect to pay at a secular college, bearing in mind that supporting genuine Catholic education is an apostolic work.”

After parents answer that question, Mr. Becher then uses a determinate formula to ensure that all families are meeting at least a uniform standard. Mr. Becher is quick to note, “I am continually amazed by the generosity of the parents of our students. Many times their proposals exceed the minimum required by the need-analysis formula. I have even had parents write to me in the middle of the school year to say they have been blessed with some unexpected resources, and they are able to pay more toward their child’s education than they previously thought possible. I would venture to say that very few colleges see that kind of commitment from parents.”

The College’s financial aid program is ready to help families whose financial resources are stretched thin. Unlike most other colleges, at Thomas Aquinas College, the needs-analysis formula takes into account many of the financial strains which families encounter, such as the cost of sending younger children to private schools, the cost of home schooling, and support for extended family. By considering the “needs analysis” in the light of the expenses of extended family, large families, and the like, this analysis is truly pro-life.

The College does everything it can to meet the demonstrated need of the students who wish to attend. The line, however, has to be drawn somewhere, and at this College, the administration has put together a program of financial aid that is reasonable and kind-hearted, yet which at the same time encourages responsibility among all parties involved.

Some might think working with applications, tax forms and regulations day after day would become rather stifling. Does Mr. Becher agree? “You have to love paperwork,” he laughs. “But seriously, I regard it a privilege to work at my alma mater. It’s wonderful to be part of something that is contributing in such a positive way to our society and to the Church. You would be hard-pressed to find a better group of people to work with day in and day out. Not a day goes by that I am not edified by the conversation and example given by our faculty, staff, students and their parents.”