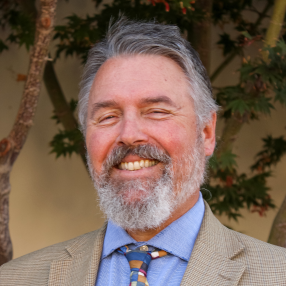 After graduating from Thomas Aquinas College in 1983, Gregory Froelich had what he describes as a “missionary spirit” and “youthful zeal” to share the education he had just received. So for the next 25 years, he spread the College’s curriculum and pedagogy far and wide — from Washington, D.C., to Anchorage, Alaska. And in the fall of 2008, he returned to share that education at the very place he obtained it.

Dr. Froelich first learned about the College in the 1970s, while a student at Corona High School in Riverside County, California. “My mom found out about it, and she said, ‘Gregory, that’s where you’re going,’” Dr. Froelich recalls. “And, in a fit of adolescent rebellion, I said, ‘No I’m not!’” Years later, while reading the archdiocesan newspaper, he spotted an ad for this nascent, great books college up in the hills just outside of Santa Paula. Already intrigued with the great books program at St. John’s College, he remembers thinking to himself, “Good grief, this is not the Thomas Aquinas College my mom was talking about — this is exactly what I want!”

Sure enough, it was the same college. Dr. Froelich visited the campus, and after falling in love with the rigorous curriculum and the probing questions it raised, he enrolled. Attending the College “allowed me to inquire deeply into things and to do this with my peers and a tutor, one who was more advanced than we along the way of this inquiry,” he notes. The seminar method was, for him, the principal way to learn. “I needed to be inquiring — asking questions and pursuing answers.”

After graduating from the College and earning a Ph.D. in medieval studies at the University of Notre Dame, Dr. Froelich accepted a three-year teaching position at the John Paul II Institute for Studies on Marriage and Family in Washington, D.C., and worked as an adjunct professor at The Catholic University of America. Inspired by his studies at the College, Dr. Froelich placed an emphasis on St. Thomas in his teaching and employed the Socratic seminar method in his classroom, but found the process challenging. “St. Thomas and Socrates weren’t exactly in vogue then,” he explains.

During that time, Dr. Froelich was reacquainted with an old college classmate, Wyn Syren — then a nursing student in her native Alaska — by way of her brother, Lester (Class of 1985). After several transcontinental visits and innumerable long-distance phone calls, Wyn and Greg were married in December of 1989.

In 1992, Dr. Froelich enrolled in the University of Virginia’s doctoral program in philosophy. Tragically, after only one year, Wyn’s brother Jon Syren (Class of 1987) died unexpectedly of cancer, prompting the Froelichs to leave Virginia for Alaska. There, Dr. Froelich taught at both of Anchorage’s universities and once again tried to replicate the Thomas Aquinas College experience by way of the seminar. “I couldn’t teach my students unless I knew during the class period that they were learning. Morally, I just couldn’t do that. I needed to hear what they were thinking.”

In 1995, Dr. Froelich and three others founded Atheneum, a combined middle and high school in Anchorage that emphasizes the great books and seminars. Eight years later, he would move on to Holy Rosary Academy, a Catholic school in Anchorage whose administrators sought to incorporate elements of classical education into their instruction. In addition to teaching fulltime, Dr. Froelich served as the school’s director of curriculum. He found working at both schools to be rewarding, but neither quite measured up to the academic environment he had hoped to re-create. “The curriculum at Atheneum was great, but the school wasn’t Catholic. Then I finally got to a Catholic school, and everybody was eager to measure their teaching by Catholic and classical standards, and they made great strides. But I could see it was going to be a long haul,” he recalls.

“Everything that I have done since leaving Thomas Aquinas College has been inspired by the education it provided me,” Dr. Froelich explains, but he learned that exporting the experience is not the same as living it. So in 2008 returned to campus as a tutor. His wife, Wyn, and their five children — Sophia, Benedict, Maximilian, Isabel, and Rose — have been highly supportive. “Just the fact that Wyn said ‘yes’ to leaving Alaska was a pretty clear sign from God,” Dr. Froelich jokes.