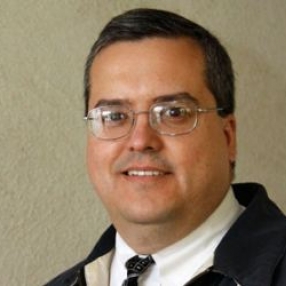 John Baer was Fr. Baer — almost. After eight years in the Norbertine Order at St. Michael’s Abbey in Orange, California, John decided the lay vocation was for him. A teacher, not a preacher, he would be. But his seminary training turned out to be, perhaps, the best foundation he could have had for making him the teacher he would come to be.

One of the fastest growing religious communities in the world, the Norbertines at St. Michael’s Abbey — and its nearby preparatory school of the same name — have seen a steady stream of traffic between their institutions and Thomas Aquinas College. Many students from St. Michael’s Prep School become students at the College. In turn, many graduates from the College test vocations at the Abbey. So it was only fitting that St. Michael’s Abbey would produce someone like Mr. Baer who would come to teach at the College.

The third of six children, John was born in Inglewood, California, but was raised for most of his life in Costa Mesa. After eight years of public elementary school he attended Mater Dei High School, the largest Catholic high school west of the Mississippi at the time. There, he was active in Model United Nations and the speech and debate team, where he advanced to the state semifinals competition.

Prompted by the childhood memory of a deceased uncle who had been a diocesan priest, he thought he would explore a religious vocation. On graduation from high school he turned down an offer to attend Georgetown University and, instead, through the inspiration of a Norbertine priest at Mater Dei, entered as a postulant at St. Michael’s Abbey.

Because of his proficiency in Latin, he began at the same time teaching advanced Latin to other novices at the Abbey, as well as at St. Michael’s Prep, where he also taught modern history. Through this study and teaching experience, he began to feel a tug outside the Abbey. After one year as a postulant, one year as a novice, and two three-year terms as a brother, he decided the lay vocation was for him.

“It was an intense period of spiritual formation,” he says, “and really defined me as who I am. My whole intellectual worldview was shaped there and I am forever indebted to the Abbey for that.”

John spent one year working as a district executive for the Orange County Council of the Boy Scouts of America, and then returned to academia. He enrolled in the graduate School of Philosophy at The Catholic University of America, where he could attend to further study of St. Thomas.

Quickly he earned academic distinction. He was awarded a Penfield Scholarship and a Centennial Scholarship; he also won the Weaver Fellowship from the Intercollegiate Studies Institute. At the same time he worked as an Abstracts Editor and as Assistant Manager to The Review of Metaphysics. He reads in six other languages (Latin, Greek, French, German, Spanish, and Italian).

In 1999, he completed his master’s degree in philosophy, writing his thesis on “The Success of the First Argument from Motion in Summa Contra Gentiles.” He sought to show that St. Thomas’ first argument for the existence of God is an argument that is part of the science of natural philosophy rather than of metaphysics. He next completed his doctoral work, with a specialization in St. Thomas and medieval philosophy.

Other activities kept Mr. Baer busy at Catholic University. He served as a representative on the Graduate Student Association Senate and on the School of Philosophy Dean Search Committee. He helped launch a website to support teaching of undergraduate philosophy, and was active in a prolife group for graduate students.

Throughout all this time, the notion of coming to Thomas Aquinas College to teach had been at the back of his mind. During his tenure at St. Michael’s Abbey, of course, he had known of the College. He had also stayed in touch over the years with one of his good friends from his high school speech and debate team, Marie (Grimley ’93) Pitt-Payne. And he met several other Thomas Aquinas alumni at Catholic University. They encouraged him to apply for a teaching position. He poured over the College’s founding document and applied for a position as a tutor. In 2001, he joined the teaching faculty

“It’s been amazing for me to read about an abstract idea like the ‘Blue Book’ [the College’s founding document] and then see it applied in concrete circumstances,” he says. “There’s a personality to the program — a set of customs — that I couldn’t have anticipated. It’s impressive to see how the College has adapted a medieval — and very Catholic — concept of learning to modern times.”

Mr. Baer’s wife, Theresa, is from Orange County as well. They met at St. Mary’s-by-the-Sea Parish in Huntington Beach after he left the Abbey, and they married after his first year of graduate school. They currently live in Santa Paula with their 11 children.

“When I left St. Michael’s, what I missed most was the intellectual community — so many people to have so many great conversations with. Now that I’m at the College, I have that back again; it’s wonderful.”

He has come to particularly appreciate the seminar method. “When I taught at Catholic University, I tried to use it there, but it didn’t work very well. I didn’t really know the method, and most of the students really didn’t care about learning. The single most astounding thing I’ve found about classes here is that students are reading things because they want to. And when you have students who want to read and talk about great works, you can have fantastic discussions.

“In some ways, the method is inefficient, because it’s indirect. But in the long run, you produce a more sound understanding in the student. Most teachers look for that moment when a student finally ‘gets it.’ With the seminar method, you get to see this in all the classes — students, one-by-one, saying, ‘Oh, I get it!’ The tangible reward for a teacher is much more frequent.

Were any other adjustments difficult for him to make since leaving the Abbey? “I used to do a lot of the cooking there and people were fond of my cooking. But I learned how to cook for 40, which is something I’ve had to unlearn since I’ve been married. I keep forgetting that I’m not cooking for 40 people.”

Lessons to unlearn from St. Michael’s Abbey — thankfully, few. The rest are here to stay.