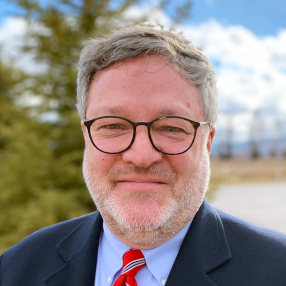 When James Link learned that the founders of Hobby Lobby had purchased the former campus of a boarding school in Northfield, Massachusetts — and that they wanted to give it to a Christian ministry to use for educational purposes — he immediately thought it would be perfect for a faithfully Catholic college. Concerned about the rise of secularism in the region, Mr. Link thought such a college could help re-Christianize New England. Little did he know he would become deeply involved in the project.

Mr. Link spent three decades raising funds for schools and colleges in the Northeast. After attending a Summer Seminar and reading Thomas Aquinas College’s founding documents, he became fascinated by the College’s unique program of Catholic liberal education. “The more I learned about TAC, the more impressed I became,” he says. “I realized that the College was more successful than any school I knew. Students pursue truth, beauty, and wisdom in a community that embraces Catholic thought in all its richness. In the process, they grow in virtue and holiness.”

From 2016 to 2019 Mr. Link served as director of East Coast development, before becoming the College’s executive director of development. “Jim has been a tremendous asset to the College,” says Dr. Paul O’Reilly, president of Thomas Aquinas College. “He has introduced us to many of the most active and generous Catholics in the Northeast, including a couple that has made the largest individual gift toward the New England campus.”

For his part, Mr. Link reports that he is honored to help advance the College’s mission. “My best hope of attaining salvation,” he says, “lies in associating with the finest Christians I’ve ever known — the alumni, parents, faculty, staff, students, and benefactors of Thomas Aquinas College.”