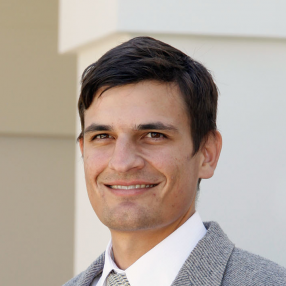 Following a profound spiritual conversion around the time of his confirmation, Jared Kuebler sensed he had a calling to the priesthood. He visited monasteries, both in his native Southern California and in Europe, but opted to attend college first. At the urging of some wise priests, he decided to visit, apply, and ultimately enroll at Thomas Aquinas College.

During his first two years on campus, Jared gradually discerned that his vocation was not to the priesthood after all — a realization that was confirmed when he fell in love with classmate Maria Kaiser. Thinking seriously, for the first time, of not spending the rest of his life in a monastery, he remembers wondering, “If I got married, what would I do for a job?”

Then his thoughts turned to his tutors at the College: “That’s the greatest job in the world. I’m having so much fun in class, and these men get to do it for the rest of their lives!”

Shortly after their graduation in 2003, the Kueblers married. Not long after they moved to Vienna, Austria, where Jared entered the International Theological Institute. During that time Mr. Kuebler got his first taste of teaching, leading Socratic seminars in an undergraduate philosophy class modeled after the College’s freshman course. After completing his master’s in theology, he moved with his family to Florida to undertake doctoral studies at Ave Maria University. There, he was able to try his hand at lecturing, which he enjoyed, but which also gave him an even greater appreciation for the Socratic discussions at the College.

That experience confirmed Mr. Kuebler’s longing to return to his alma mater and to teach in more than one discipline. “There were a lot of places I was interested in teaching at, but I always had it in the back of my mind that it would be sad if I could never do Euclid again, or Newton,” he says. “It was always my dream to come back, particularly for the community of tutors here and the opportunity to teach across the curriculum.”

That dream has come true. Mr. Kuebler now enjoys what he still considers to be “the greatest job in the world.”