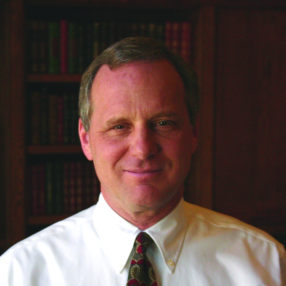 After graduating from the University of Notre Dame in 1975, Quincy Masteller served as a legislative assistant to U.S. Senator John Culver of Iowa, first in Washington and later in Des Moines, by running the Senator’s Iowa operation. In 1977 he joined his father in founding a hotel and restaurant management company which serviced numerous properties in Iowa, while also obtaining an MBA from Drake University. Mr. Masteller attended St. Louis University School of Law where he was Note and Comment Editor of the Law Review, graduating in 1982.

He subsequently clerked for Judge Carl Gaertner, Missouri Court of Appeals, for a year and then joined the law department of Emerson Electric Company, a Fortune 500 corporation in St. Louis. As senior attorney at Emerson, Mr. Masteller managed product-liability litigation across the country and handled numerous corporate mergers and acquisitions for the company. While at Emerson, he met his future bride, Katie (Blewett ’82), on a business trip to Los Angeles.

In 1990 Mr. Masteller left Emerson for California and joined the Ventura County law firm of Lowthorp, Richards, McMillan in Oxnard, becoming a partner in 1994. He specialized in business/corporate law and estate planning. He also has performed pro-life legal work assisting in the defense of the sidewalk counselor defendants in the Santa Barbara Planned Parenthood cases. He first came to Thomas Aquinas College in 1999, and currently serves as the College's general counsel.

Mr. Masteller was a founder and longtime director of Saint Augustine Academy, a private Catholic middle and high school in Ventura, a director of the Oxnard Rotary Club, and has been active in his parish’s Knights of Columbus. He and Katie live in Santa Paula and are the proud parents of two sons and two daughters.