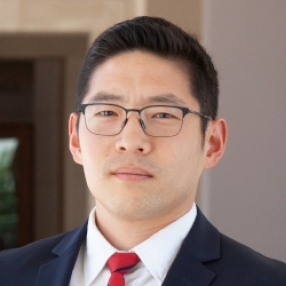 As the son of Korean immigrants growing up in Diamond Bar, California, Dr. Joshua Lim had a yearning for truth, even in his earliest days. “I wanted to learn everything,” he says. His family attended a Presbyterian church with a Baptist-trained pastor, where he came to believe that if truth is what one seeks, there is only one place to find it — the Sacred Scriptures — a lesson he took to heart during his high school years. “I must have read the Bible for six hours a day,” he recalls. “I thought the only way to the truth was through Scripture, and that was the only truth worth knowing.” Through his devotion to the Word of God, he began to consider a life in ministry.

Around that time he also began to study theology outside the confines of the Bible. “While in college, I came to realize that there were books about the Bible and books about theology that improved my own understanding of the text, insofar as the people who wrote them knew more Greek and Hebrew than I did and were far smarter than I was,” he explains. “I saw that I didn’t need to find all the answers starting from scratch.”

After graduating from the University of California, Irvine, Dr. Lim enrolled at Westminster Seminary and began his theological studies in earnest. Yet rather than fulfill his yearning for truth, the cacophony of differing opinions made truth seem all the more elusive, raising new questions, such as, who has the authority to interpret Scripture definitively? And who has the authority to determine which books of the Bible belong in the canon?

Such theological questions accompanied deeper, philosophical ones. “After reading Kant, I started to wonder if I even could know the truth,” he observes. “Functionally, I became an agnostic, and I stopped praying, because I didn’t think I could pray.”

While attending an academic conference, however, Dr. Lim met a Dominican priest, Rev. Thomas Joseph White, O.P., who helped him find answers to these questions and more in the Catholic faith. Fr. White, in turn, introduced him to Rev. Sebastian Walshe, O.Praem. (’94) — a Norbertine priest, philosophy professor, and TAC alumnus. “I started meeting with Fr. Sebastian for private instruction to be received into the Catholic Church, even while I was still at the Protestant Seminary,” he remembers. “As a result of my conversion, I was excommunicated from my Protestant church, but the seminary still allowed me to graduate with a degree.”

Having been received into the Catholic Church, Dr. Lim went on to earn a master’s degree in theology at the Dominican House of Studies in Washington, D.C. He then entered the doctoral program in theology at the University of Notre Dame, during which time he met his wife, Mary Elizabeth. The couple married in 2015 and now has two sons and a baby girl on the way.

As he was finishing his doctorate, Dr. Lim applied for a position on the TAC teaching faculty, which led him to read, for the first time, the College’s founding document, A Proposal for the Fulfillment of Catholic Liberal Education. Intellectually and professionally, he says, it was a game-changer for him: “After I read the Blue Book, I realized that I would be terribly unhappy anywhere else.”

Today Dr. Lim teaches on the California campus, but as the student body and faculty grow in New England, he will head east. Still animated by the love of truth that began as a young man, he now gets to continue his search alongside his students.